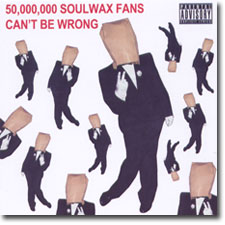 Soulwax have been going at it for years now with their sought after remixes, the 2 many djs and hang all djs mix disc series and as members of the Soulwax rock band (they even have a song on their album Much Against Everyone's Advice called Too Many DJ's) and I wonder if the 50,000,000 Soulwax Fans Can't Be Wrong 2 cd set might be the next step in the Soulwax story. Soulwax have changed in 2005 from their 2 many djs and hang all djs series.

Where the 2 many djs and hang all djs series were full of fun and crazy mixes with left field choices mixed together with more modern tracks (somehow retaining continuity) which made for fun and challenging mixes (which were really just copies of the Soulwax brothers' radio shows), 50,000,000 Soulwax Fans is really just another mix disc compilation of the latest electronic music (with only a few older tracks thrown in every so often). But thankfully there are a glut of Soulwax remixes strewn throughout the 2 cds which more than make up for the lack of older music. 50,000,000 Soulwax Fans is taken from the Radio Soulwax broadcast on Radio 1 from January 2, 2005 . It's like Soulwax have started playing more new music maybe that they've been sent in the mail instead of mixing it up with older songs now that they've made a name for themselves.

The first disc does start out with the Soulwax edit of David Bowie Rebel, Rebel (and for some reason they chose the 7 inch mix to edit) before leading right into Soulwax remixing themselves on the E Talking track from their Any Minute Now album. Other older tracks which are thrown in the mix on disc one are Bob Seger Ramblin' Gamblin' Man, and other than the rocking Zebra Jeans by The Girls that came out early this year and that ends disc one, Soulwax stays mostly in the electro/electronic arena.

Some songs on 50,000,000 Soulwax Fans tend to be longer than on earlier Soulwax compilations (at least until disc two) which could lead to some boredom on the part of their ADD audience. So for instance, their own Soulwax Nite Version of their own E-Talking feels like it goes on for too long at 4 minutes long (maybe also because it's a rather dull song). Maybe if it was the beginning of their radio broadcast, they were just getting themselves in order.

Other Soulwax Edits on disc one work a little better, like their edit of Trixx by Sweet Light which adds some edge to an otherwise dated sweet synth track. Miss Kitten's Requiem For Hit sounds good in just about anybody's hands (whether it be Sylvie Marks or Soulwax) and it's definitely a highlight of this mix half way through disc one.

Other highlights from disc one include the cool cover version of Benny Benassi's Satisfaction done up disco punk style by Gomma's Who Made Who; and it's great to hear Annie's Chewing Gum get a remix treatment with a hard rocking backing.

Disc two features some more Soulwax Edits like their edit of LCD Soundsystem's Daft Punk is Playing at my House which everyone wants to get their hands on. It would've been funny if Soulwax had put a Fall instrumental underneath the LCD Soundsystem vocal.

There's a nice lead in with Tiga's Louder Than A Bomb and !!!'s Louden Up (the Rub'n Tug Mix) into the Soulwax edit of Whitey's Leave Them All Behind which is an electro jam unto itself. And if you think Jon Spencer Blues Explosion can be tamed, then checkout the Dfa Remix of Fang Plastic (I guess it's a track from their last Matador Records album called Plastic Fang which was also their last album going under the name Jon Spencer Blues Explosion).

Things get inspired with the drum intro to Jimi Hendrix's Little Miss Lover mixing with Mia's Galang mixing into Jay Z's 99 Problems (which has some profanity) before we get ZZ Top's Cheap Sunglasses. But whether they are just being funny, I could do without the Rave section on disc two (since it's not particularly inspired rave music). Also, the ending of disc two is a little less inspired with Snoop Dogg, Kraftwerk, Ronnie James Dio and The Animals (mistakenly listing a song called A Girl Named Sandals which should be A Girl Named Sandoz - a lot of the tracklisting is erroneous, in fact) not wholly working in the mix. Overall though, if you want to hear Soulwax in 2005, the 50,000,000 Soulwax Fans Can't Be Wrong 2 cd set is a great collection.