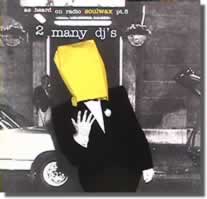 The latest in the continuing series Radio Soulwax - Part Five is another fine installment in the almost faultless series of radio shows recorded by the Belgian duo Soulwax. This is probably the most wildly eclectic set yet - which could be a downside in that the flow is not nearly as seamless as in the other volumes - but on the other hand there is the most variety yet. I think the variety works in its favor - and this very well may be the volume I return to the most. This is truly the mix that will never leave you bored - and will keep you guessing about what is coming next - kind of like taking your entire playlist and shuffling it for a minute on each tip. What I love about the Soulwax mixes is the way they combine groups that have influenced each other back to back - as well as digging up some lost gems. It's a music lesson that you can groove, rock out, and enjoy. There's no way that these mixes won't be noticed whether they are played on a radio show, at a club or party, or in your car.

After an intro which combines a female french voice with the human beatbox, part five in the Radio Soulwax series gets grooving with the Coldcut remix of Eric B. & Rakim's Paid in Full which mixes well with James Brown counterpointing with some female moans. Next is some bass heavy tunes curiosity of the Original Concept and the the Beastie Boys. This mixes into the more subtle Elle Et Moi by Max Berlin which is edited with the Serge Gainsbourg Bonnie and Clyde and Le Nouveau Western by MC Solaar. A rap-filled hip hop rhythm-induced introduction that mixes with some French language montages. Amongst the highest mixes on board.

Things get funky when Air hits the playlist - and the Moog Cookbook remix of Kelly Watch the Stars. We get another visit from the mysterious funkster Roy Keating - doing it up moog style on CCR's Proud Mary. This moves right into power chord territory thanks to the Kinks and the Rolling Stones - tweaked oh so well and ending with the enjoyable Fatboy Slim mix of Satisfaction Skank. Retro-moog meets raunch chord perfection and big beat all in five minutes time. 12. Blur- Bugman Remix - Girls & Boys 13. Jaydee- Plastic Dreams 14. NIN- Closer

This section starts out strong with the Bugman remix of Blur's Girls & Boys - adding a pounding rhythm to the Brit-pop treasure. Jaydee keeps things moving - but I was not crazy about the NIN's tune here - which doesn't even mix in to the previous track that well - though it's funny to hear it done up soul style (watch for the overt profanity too).

The next section takes the Kraftwerk rhythms of Numbers/Tour De France and electro-fies Beck, as well as Adamski and Basement Jaxx. This all seems to mix seamlessly in an electro/funky fashion quite well.

Things were really getting pumping in the Basement Jaxx song when Super Discount appear to really get things moving in the French House style. We also start getting a hint of drug samples with the Marijuana sample thrown into the disco rhythms. Q-Tip from A Tribe Called Quest comes in soon though beating down any house groove to bring in a more hip hop rhythm right away. This leads into the 1980s duet between Temptation's singer Dennis Edwards and Siedah Garrett cutting it loose soul style right into TLC. I guess this shows things really don't change much.

Things switch gears again with Junkie Xl and New Order's Confusion creating an electro vibe again and everything keeps rising with Super 2000 Vs. Daft Punk doing it up on Around The World from their debut platter. Another fine example of my favorite bit on this mix. It ends up sounding like a funk-house classic inspired by Eric Burden jamming with War from the early 1970s. Old Skool Flava is mixed with James Brown shouts and computerized voices in a perfect merger.

Things switch gear into the rocking guitar mayhem of Beck's Salt In The Wound - the riff of which fits in with the Beatles Taxman like a glove. And who else was inspired by the Beatles' Taxman and made a career out of it but Lenny Kravitz? I'm sure John and George were quite aware. Lenny and Beck were continuing where the Beatles left off.

Young MC (aka Marvin Young) and Groove Armada certainly know how to bust a move on the groundbreaking, Grammy-winning Bust A Move from 1989. Classic stuff. Groove Armada update that sentiment from a female perspective and were able to get a tv commercial out of it too when this song was used in a Mitsubishi commercial - which helped to sell more records. Dirty Funker adds some dancefloor poetics to the mix with the white label classic Future. Nik Kershaw gets things going 80s style with Dancing Girls and then Michael Moog adds the broken beats of That Sound.

Ending on the 80s retro rhythms of Art of Noise and the Pot humor song parody of Sesame Street is sure to leave a smile on your face. hearing Kermit the Frog and Bigbird attempting the alphabet will sure freak out any children that hear it. Another incredible mix from Radio Soulwax.