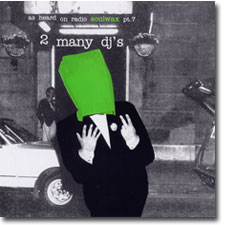 If I had to do a top 30 list of my favorite records from the past year, every 2 many dj's and hang all dj's disc would be on it.

I love these 2 Belgian producers, who also have a normal rock band called Soulwax.

Volume 7 of the hang all dj's took me longer to get into than other volumes. Partly this was due to the fact that volume 7 incorporates the mix they did for Paris boutique Colette as CD2 of the compilation 'Colette No. 4.' Partly it was due to the many hiphop tracks on volume 7. My obstacle may be your pleasure: the 2 many dj's mix for the Colette CD is vintage Soulwax that you will want to hear.

With repeated listenings, I have come to treasure this disc as much as others in the series. I was especially happy that they included a Black Lodge and a Kiko track.

I was fortunate enough to buy a Black Lodge 7inch and 10inch when I could a few years ago. Even though Mo Wax had announced that they signed Black lodge, nothing has ever come out, and no one even seems to remember them. Black Lodge can sound like a disco band on one song, and Disney's Elephants On Parade on another.

Kiko is a French artist I have read about, but have never been able to find a CD from. He is not to be confused with the Bpitch control artist Kiki.

I also love the customary Michael Jackson track on this comp. This time, Billie Jean is blended with Playgroup Make It Happen and Ladytron Seventeen. Part of the art of Soulwax is the ability to make such played out (though admittedly great) songs sound fresh in their new context.

If you don't know the originals of the tracks on this comp, you may not realize that every track is played with and combined with bits from other sources. Do I hear the "Pop" from the M song Pop Music blended into Public Enemy Fight The Power? Everything is suspect as you listen to these tracks. Listening to the disc, you will probably find some special ingredient added to a song that completely passed my radar.

I enjoyed the dialog snippets of Blade Runner and Rambo during Sigue Sigue Sputnik, and the mock advertisements Lovage and Music To Make Love To Your Old Lady By, from a 2001 CD on the 75Ark label by lovage.

Love Unlimited Orchestra provide the background for Sticky, who gives us a chronological countdown of important artists of jazz, bebop, rock n roll, soul, funk, and finally "the ultimate" hiphop.

Nothing here for me to complain about: another great disc from the brothers Soulwax.