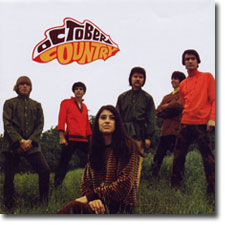 October Country - a song, an album, or a band? Well, indeed, it was all three of these - and much, much more. October Country were a group - a folk rock group out of LA in the mid 1960s, who were taken under the wing of young wunderkind Michael Lloyd, who was a producer and songwriter by the age of 13, and worked with the band that would become October Country when he was 16 and 17.

The group recorded their full length album and 3 singles under the production and with the compositions of Michael Lloyd, in what would become a string of wonderful Beatles/Beach Boys inspired folk rock and pop rock albums. In fact, it's known that Michael Lloyd himself would often re-record parts the band had originally recorded, to improve on the recordings in the studio. This work on Lloyd's part led up to and included the album by The Smoke (not the UK band) and the music for the Cattanooga Cats (which believe me, is worth hearing). Up until this Rev-Ola reissue, October Country's orchestrated harmony pop music was nearly impossible to find, except to collector's and cd-r traders. Thanks to Rev-Ola, October Country's recordings have been given a wonderful reissue treatment, and in fact the album has never sounded better.

The two songs which first stand-out on the October Country album are songs which were both released as singles, and which were eventually re-recorded for The Smoke's album. These songs are the set opener October Country and Cowboys and Indians. These two songs are both amazing takes on the orchestrated pop sound, addictive harmonies and melodies, coupled with a driving insistence, thanks to the production and song composition. Other songs that stand out immediately are the McCartney-esque I Wish I Was a Fire and the punky My Girlfriend Is a Witch. The bassline and melody, along with the trumpet solo are so addictive in I Wish I Was a Fire, you'll sure to be humming along. My Girlfriend Is a Witch was later recorded for The Cattanooga Cats project, but is heard in its definitive version here. This is a song most deservedly needing re-discovery.

Other songs I should mention, is She's Been Away, which is a delightful twee gem, with it's orchestrated wonder and sweet time changes; it foresaw the culmination in these ideas to come in The Smoke album. I Just Don't Know is a rollicking number which reminds me of the jug big band sound which groups like The Lovin' Spoonful worked at. End of the Line is another song which leads the way to the more complete sound of The Smoke, with it's forlorn Mamas and Papas vocal harmonies and song structure. here's hoping the long awaited and overdue Smoke album will see the light of day as a reissue soon. For right now though, October Country has what we need, and it's great that Rev-Ola have continued to mine this territory of lost 1960s music, music which is most deservedly finally reaching the cd age.