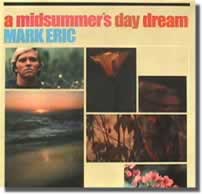 Every so often, there is an album recorded so out of touch with the times that there is nothing for it to do but die on the vine, even if that album is a masterpiece. Mark Eric's album A Midsummer's Day Dream is just such an album. Released the same month as the Woodstock festival in the summer of 1969, there could not be an album as far removed from the music that summer as A Midsummer's Day Dream. Disregarding the warnings set forth by Hendrix when he proclaimed that we would never hear surf music again, Mark Eric took the Californian music of the Beach Boys' and the Sunrays into the nether regions of the late 1960s. Sadly, an album of luscious beauty and elegant arrangements was lost in the heyday of "a hazy shade of gray".

Mark Eric was not about rocking out and maybe that is one reason his album was not adequately promoted by his record label at the time it was released. He was more about group harmonies inspired by the Four Freshmen, personal songs with a laid-back Californian attitude, and jazzy arrangements. So while the entire album does have a hazy late summer feel to it, that summer in 1969 left Mark Eric miles away from recognition. Left alone with a lost platter and no one to share it with, Mark Eric and his only album A Midsummer's Day Dream drifted into obscurity.

Thanks to Rev-Ola, A Midsummer's Day Dream no longer languishes in the vaults or as a 3 figure auction (copies were few and far between and prices were high for a mint copy of the lp). Not only has Rev-Ola reissued the entire album in incredibly pristine sound, they have also included 4 unreleased bonus tracks and the alternate 45 mono mixes of a handful of the songs. If there were awards for the most loving care lavished on a reissue (and why shouldn't there be, there's awards for everything else?), Rev-Ola would get one with how incredible A Midsummer's Day Dream looks and sounds. Don't get me wrong - A Midsummer's Day Dream is no Pet Sounds - although it does have some similarities to that album - it is truly a different animal. Where Brian Wilson was in fact veering away from his Four Freshmen's fetish during Pet Sounds (he himself has said he was trying to top the Beatles' Revolver), Mark Eric has no such aim - and has decided to stay put in his love of the jazz harmonies of the 1950s and early 1960s. Where the Beach Boys were aiming for that perfect mix of folk, rock and teen sensations, Mark Eric was looking to stay jazzed in his Californian harmonic roots.

From the first 'Bah 'Bah 'Bah's which start out California Home, Mark Eric sets his sights on the loneliness he feels as a boy on his own and out of his element, comparing a trip to the miserable-ness of the mid-west with his homesickness for his home in California (note the Beach Boys' tribute in Mark's lyrics when he mentions the Californian Girls). Move With The Dawn has a compelling bass and lead guitar figure etched into the driving melody which is enhanced by the longing of french horns. With Laura's Changing, Mark is not afraid to sing slightly out of tune to get across his meaning and it reminds me of the Sunrays or 1960s Brazilian music. Where Do The Girls Of The Summer Go? is summertime loungepop at its best with incredible string arrangements and melody. I'd Like To Talk To You is the most Beach Boys inspired tune here, with its Chuck Berry guitar and popping rhythms. Take Me With You is a dreamy pop song which would not be out of place in Jan and Dean's hands. Night of the Lions had the most potential for being a hit, and it sounds like a song from a movie never made in those hazy days of the late 1960s. Don't Cry Over Me is another dreamy number with incredible multi-tracked vocals By Mark. We Live So Fast has another incredible French horn solo used as a lead melody, in this up tempo jazz vocal fest. The album ends with the stunning (and true) song Lynn's Baby, showcasing Mark Eric at his most soulful and confessional - like a lost Smokey Robinson platter.

It hurts to hear the post-A Midsummer's Day Dream songs that Mark recorded but were never released - because they are so amazing! These aren't just demos either, they are full-fledged productions, and while they are certainly not as lush as the album tracks they show Mark rocking out in ways he didn't on the album. Place For the Summer is able to rock out and have tour de force vocals by Mark. Build Your Own Dreams is dreamy soft pop right out of the Brian Wilson-inspired songbook. Goin' Native shows the more playful side of Mark Eric (just imagine what he means...on a beach). Summer Goes This Way is an acoustic guitar strummed sweetly sung personal song which ends the unreleased bonus tracks. Add to this entire package, 4 mono 45 mixes (4 alternate versions of various album tracks - note the fantastic big band instrumental version of Night of The Lions pasted as a mystery bonus track after the last track ends and not noted in the tracklisting) and that is the incredible experience which is the Rev-Ola reissued gem that is Mark Eric's A Midsummer's Day Dream. If you have an inkling of an interest in soft pop, jazz inspired vocals in a rock setting, Beach Boys, California, or luscious 1960s music, I think A Midsummer's Day Dream is a must listen.