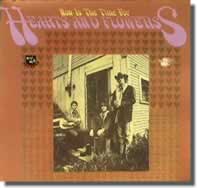 Hearts and Flowers were a folk rock band out of California with a startling fresh sound, full of angelic harmonies, incredibly organic folk instruments and tremendous song choices, and had that certain modern touch (in that the production is spare but effectively evokes the instruments used in a simple but sublime manner) that was certainly an influence on the sounds that appeared in the LA scene in the 1970s. I love the way Hearts and Flowers is able to combine the wide-eyed harmonies and the lyrical folk rock honesty with an incredibly wonderful combination of instruments. I keep discovering hidden elements not noticed before so that what at first might have come off as just another folk rock band, turned into a cd which has many listens ahead of it. And what's more, both albums have something different to offer and are equals in quality.

The first album, Now Is the Time for Hearts and Flowers is the more straight folk album. Not only does this album have an incredible song selection in the likes of Tim Hardin's Reason To Believe, Carole King's Road To Nowhere and Donovan's Try For The Sun, but there is a shimmering sound throughout thanks to plucked autoharp and a subtle but masterful production which brings out each instrument perfectly and only enhances the angelic vocal harmonies. You can't go wrong with great original tunes like The View from Ward Three (which reminds me of the Sunshine Company's incredible mix of folk rock), or the moody Cat Steven's like Please and the pleasant but haunting jaunt of Rain, Rain.

The second album Of Horses, Kids and Forgotten Woman is a more mature, rocking album, with a more orchestrated production and even more mature arrangements. The whole album is a stunner through and through. I love the stop near the end when the strings are left hovering on their incredible Dylan-esque cover of Arlo Guthrie's Highway in the Wind. It reminds me of the Dylan-esque moments on the equally lost classic Robbs' album. Hearts and Flowers take the Jesse Lee Kincaid song She Sang Hymns Out of Tune to another place. Colour Your Daytime is like a lost Phil Och's tune with plenty of harpsichord to back the anthemic vocals. The last track on the album Extra Extra/Rock & Roll Gypsies is the most rocking tune Hearts and Flowers ever did and an interesting medley. But Ode to a Tin Angel is the greatest highlight on their second album - it is an amazing piece of psychedelic folk-rock and worth the price of this cd alone.

Ever since I fell in love with the folk rock of the Sunshine Company (who also have their own Rev-Ola cd compilation worth checking  out), I have been looking for more over-looked folk rock from the same time period - and Hearts and Flowers definitely fits right next to the Sunshine Company.