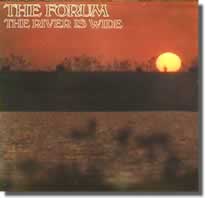 The folks at Rev-Ola have really done us a favor by reissuing a handful of 1960s soft pop recordings, that until this year have been lost to the digital breeze. The Forum's only album The River is Wide was a blip on the map in 1967, and while it and the group were soon swallowed by time's evil hand, what the Forum left behind (and Rev-Ola have lovingly restored in its entirety plus a slew of bonus tracks) is a melting pot of incredible musical influences.

The Forum originally started out as Les Baxter's Balladeers, a singing folk group, who were transformed into the Forum in the haze of the folk rock boom of 1966/1967. Co-produced and arranged by Les Baxter himself (who also wrote a number of the songs too) and Norm Ratner, The River is Wide has a whole host of influences: from the Mamas and the Papas harmonies, Sergio Mendes' provocative rhythms; from the Phil Spector produced group the Righteous Brothers' soulful male vocals, to the Troggs angsty delivery and fuzzed arrangements; from the tripped out soul sunshine of the 5th Dimension and the girl groups' sweetness. All of this was swirled together with the decorative touch of Les Baxter's loungehand.

Amazingly, The River is Wide all holds together really well - and perhaps the people at Mira Records who originally released the album in 1967 didn't really know what to do with it. The original artwork (recreated herein) contains an odd river scene front cover and even stranger backcover photos of The Forum's Phil Campos, Riselle Bain, and Rene Nole looking like a lounge act smirking at their own little in-joke. Decidedly square and indistinct in a market filled with the saucy Mamas and Papas delivering themselves in a swimming pool and Sgt Pepper's daft art. So while the single version of The River is Wide single bubbled into the top 100, it actually took another version by The Grass Roots to reach the top 40 with their rendition of the tune in 1969. And what a tune. The River is Wide is included in the album version and single versions (both vastly different arrangements) and as two bonus alternate takes - and wow what a wild song (The Forum did the more exciting version). It was definitely a creative musical environment to produce such an ebb and flow in a song. Other highlights on this cd reissue include the moody sounds of I Like What I See and The Time Is Now both with a mix of folk sounds and loungey percussive piano elements, the sweet girl group harmonies of Girl Without a Boy and I Fall in Love (All Over Again) (a bonus track), and the trippy lounge of Trip on Me and Look the Other Way. The Forum were lost in a river of pop music in 1967 - but thanks to Rev-Ola, they are riding high again in 2003. The Time is indeed now for The Forum.