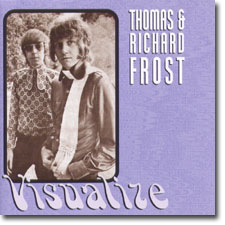 Thomas & Richard Frost were a talented duo who were involved in some of the most intriguing late 1960s rock groups coming out of California. I first heard them play in one of the best American mod-influenced groups called Powder in the mid-60s. They found little success, even after recording a handful of tracks at Gold Star studios, none of which actually came out at the time. Powder's music was finally unearthed and released on cd/vinyl in 1996 on Biff! Bang! Powder put out by Distortion Records.

After Powder fizzled and a short stint in Sonny & Cher's touring band, Thomas & Richard Frost tried their hand at the soft rock sound, inspired by how folk rock heroes like Donovan had gone twee pop. Between 1968 and 1970, they recorded a handful of singles for Imperial Records, and finally recording an album in 1969. Sadly, this album was also shelved. It wasn't until Joe Foster at Rev-Ola did some footwork in 2002, that the entire album Visualize was finally released for the very first time, as Thomas & Richard Frost would have released it.

Visualize is that amazing lost classic we always dream of finding. It combines the remnants of a dreamy folk rock sound, couple it with loungey horns and soft pop harmonies, and combine it all in a mesmerizing blend. Think Kim Fowley or Michael Lloyd, if they worked with Salt Water Taffy or Jan and Dean, and you get an idea of how Visualize sounds.

The exquisite psych pop opener of She's Got Love (once you get past the 30 second album introduction, Prelude), which was one of the singles released in 1969, is by far the best track here. Where Did Yesterday Go? is the kind of song I dream of finding, an early morning soft pop gem lost in a hazy shuffle. Both December Rain, April Laughter and The Word Is Love have shades of Donovan hovering over them. With Me My Love reminds of the pleasures of the Twinn Connexion's Turn Down Day. Where Are We? is a twee ballad that could be right off of the latest Belle and Sebastian album. If I Can't Be Your Lover is a bouncy sing-along Beatles-esque album closer (just watch for that outro!).

All of the bonus tracks (13-16) are superb additions, and all except Everyday Judy were released as singles. They all have a similar vibe to She's Got Love (the album's starting track, which was also released as a single) and rate amongst my favorite tracks on the disc. Hello Stranger is a super charged LA pop tune with great horns to emphasize the quirky rhythms. Fairy Tale Affair is an adrenalin inducing pop song, thanks to those harmonies. I love gummy tunes like Open Up Your Heart, this song reminds me of the Rock Flowers, because of the soaring strings and melody. Everyday Judy is a nice slow, soulful number and a great way to end the cd.

I don't know what we would do without people like Rev-Ola or Sundazed. People who keep unearthing these wonderful, lost pop gems. It's great to know that not only are there still lost pop gems not yet heard or re-discovered yet, but also that there are still people who appreciate great pop music.