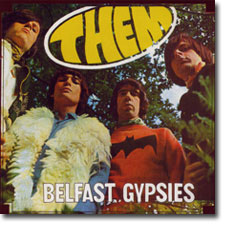 Kim Fowley discovered the Belfast Gypsies from the remnants of Van Morrison's group Them. Upon the birth of Van Morrison's solo career, Them split into two different groups - Them bass player, Alan Henderson took the group's name to the U.S. and released some psychedelic albums (Now & Them and Time in! Time Out! For Them! have also been reissued by UK reissue label Rev-Ola). The other off-shoot of Them, was re-christened the Belfast Gypsies, and included Them's organist Jackie McAuley and his brother, Pat, on drums. Under the wing of Kim Fowley, who was visiting the UK fresh from California, looking for new bands to work with, the Belfast Gypsies released a couple of singles and an album under the names Belfast Gypsies and The Freaks of Nature. Where the splinter Them group who settled in the U.S. took a foray into psychedelic music, Belfast Gypsies stayed true to their R&B garage rock roots, creating primal stabs of vinyl passion. Rev-Ola has done an incredible job bringing together all of this music on one amazing cd, which - if you haven't heard, will shatter your illusions that you've heard it all before.

At a time when The Beatles' Revolver and Sgt Pepper were paving the way, creating a blueprint for other groups to follow, often these lesser groups were followers and their end results were dire. Belfast Gypsies, however were caught and held in that moment which made them so great. Kim Fowley did a wonderful job in that way - he was able to take the angst of rock groups of the day and nurture that angst for all it was worth.

Belfast Gypsies is that mix of folk rock gone asunder (a la the Animals' House of the Rising Sun) and the Bo Diddley beat mixed with Kim Fowley's freaky LA paranoia. Kim Fowley gave the group help on such songs as Gloria's Dream (a take on the original Them's hit song with great follow-up results), People, Let's Freak Out (definitely a tune worthy of being released by a band also called The Freaks of Nature... as only Kim Fowley would name them) and the astounding Secret Police (the crowning moment for the Belfast Gypsies sound - a snarling, paranoid anthem which pulsates with angst).

Belfast Gypsies combine these moments with their own originals, some blues and folk covers, as well as a couple of Dylan/Donovan tunes.

Belfast Gypsies were honing into the folk rock sound on their originals which include The Crazy World Inside Me (a plea-ridden song with a building melody), Aria of the Fallen Angels (a tongue in cheek "classical" inspired instrumental which sounds like soundtrack music), Suicide Song (the strangest song on the album about the suicide of the girl form the wrong side of town) and The Last Will and Testament (another folk rock inspired ballad which owes a lot to the sound of The Animals).

The blues and folk rock songs include Midnight Train (with an amazing workout on harmonica), Boom Boom (a chestnut no-one was covering in 1967, and this version blows away many of the versions I've heard of this oft covered tune), and The Gorilla (an obscure French EP instrumental and one of the true gems on this cd).

The Dylan cover of It's All over Now, Baby Blue is also another one of the finds on this disc - one of the better covers of this song, and it should be in any Dylan fan's collection. The Donovan cover of Hey Gyp (Dig the Slowness) is a fitting Belfast Gypsies cover (check that song title) because it has that Bo Diddley beat that the Belfast Gypsies do so well.