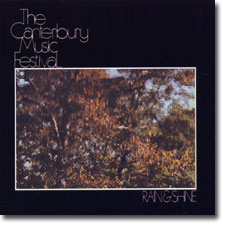 The Canterbury Music Festival album Rain & Shine is one of those mysterious affairs from the late 1960s that are talked about with hushed breaths, in dark corners of lounge clubs and bedrooms. Imagine if you will a band with a heart of gold, a few songs to be demo'd, and the luck to hook up for a few brief moments with one of the best kept secrets of the 1960s, and you have an idea of what The Canterbury Music Festival was like. Add to that, the fact that the band never even knew this album was issued, and even if they did know about it, they probably would not have received a copy, because only around 150 copies were even pressed and distributed.

The Canterbury Music Festival album Rain & Shine was released on The Token's record label BT Puppy in 1968, after a handful of single releases, and probably after the group had already broken up. Lost in the shuffle of other BT Puppy releases, The Canterbury Music Festival all but disintegrated, only to be discovered years later by the soft pop aficionados at Rev-Ola in the UK .

Rain & Shine contains The Token's brand of harmony pop, something they had been doing for years with hits like The Lion Sleeps Tonight, but in the late 1960s had combined with a Beatlesque brand of pop. This combination created a unique harmony hybrid (check out the amazing under-rated soft pop platter The Tokens recorded called Intercourse if you don't believe me), and thanks to the involvement of The Token's themselves in production and songwriting, this album shines with a '60s pop delight. There's a shimmering and delicate sheen to the album, like rain falling on a bed of leaves in the fading days of Autumn. Plucked guitars, fuzzed but minimal organ, two-toned bass lines (a Token's trademark which is put to good use on Rain & Shine), the sweet harmony vocals and the sunshine sadness of the lyrics, all combine together for a host of amazing songs.

First Spring Rain gives a good indication of the sound of the album from the start. The plucked guitars, the gliding string arrangement and the lush backing vocals will either send you into a soft pop heaven or dull the nerves of the more jaded. I for one am transported, and continue to be on the next song, Sunny Day, which is even more blissful with its melodic guitar lead (which recalls a lounge version of the 80s band Felt), hushed lead vocals and it's delicate yet soaring arrangement. Sharin steps back in time for an early 60s feel, an almost Buddy Holly styled tune (written by the enigmatic figure Brute Force).

Why Does Everybody Run to Home? continues the melodic guitar leads found in Sunny Day, but with a hint of early 60s vocal style. A really beautiful tune with elfin lead vocals.

Super Duper Trooper is the fuzzed out psych pop tune buried on this album, just waiting to be dug out and enjoyed. You can't go wrong with a song about a psychedelic cop that will pull you over using a light show - with siren sounds and a Beatles stomp in the guitars.

You're the Only Good for Me (another Brute Force number: he's definitely a 60s songwriter worth looking into, I think) is a sweet soulful number. Mr. Snail is an incredible gem of a Token's song (they released their own version at this time as well) with a swaying Beatlesque beat (and theme - the songs about a snail!) and a throbbing bassline which mixes dreamily with the swirling keyboards. The best part of Poor Man has to be the plucked guitars which mix well with the swaying melody of longing.

Angelina is a beautiful song with more of the soulful rhythm backing and a catchy as all heck chorus which should have been the hit from this album. Pamela is a real beautiful bonus song (which was released by a group called The Train but written by members of The Canterbury Music Festival) and is lounge pop heaven.

That's not to say Rain & Shine is not without its faults. The album has a feeling like it was recorded over a year or two (perhaps from 1965-1968), and it has a bit of a cobbled together feel to it. Even at a short length, there are still two instrumentals that don't add to the whole so well. Girl of the Skys is the better of the two with it's acoustic guitar melody, but seems unfinished or under developed. There's also an instrumental cover of Dusty Springfield's The Son of a Preacherman which is an odd song choice and not performed all that memorably (though if you like the sound of sitars in the 1960s, check it out).

I think the fine folks at Rev-ola should be saluted for their efforts. This album at one time carried a $300 price tag (I kid you not), so I think it's a real coup that this album has finally received the royal Rev-ola treatment. Not only did Rev-ola uncover one of the lost gems of late '60s soft pop, they also lovingly restored the sound better than it's ever sounded, even in the original pressing. It will also live up to your soft pop dreams.