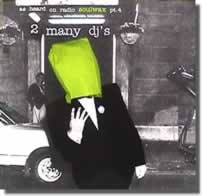 Radio Soulwax have done it again - with Part Four in the much sought after 2 Many DJs compilation series. What has become it's own special brand of DJ mix cds, Soulwax have not only kept the bar high, but have kept the quality as high, if not higher than the previous volumes. Soulwax have created a hybrid mix cd halfway between a regular mix cd of favorite tracks running the gamut of styles, with the highend DJ sessions which only the really great DJs can mix on the fly. Part Four has a lot to offer including a handful of their own Soulwax remixes (on tracks 2, 3, 12, 34, 37, 43) in which we get to hear the full mixed magic of Soulwax. There are quite a few awe-inspiring mixes here which would light up any room - the kind of thing which will you leave mixologists scratching their heads and saying "Now, why didn't I think of that?"

Part Four is pretty well divided up in sections - and for starters we get a blend of tracks (1 -7) which get things going with a really rock solid breakbeat foundation. We start out with two Soulwax remixes including Deus's Everybody's Weird (Soulwax Remix) and the Beastie Boys' Intergalactic (Soulwax Remix). This melds seamlessly - thanks to an out there synth solo into the more subdued Mediate by INXS. Things don't stay mellow for long when Run DMC make their appearance in an old school style mixed in with some Herbie Hancock keyboard bouncing. Arbeid Adelt's cover of PIL's Death Disco follows with some Fripped out electric guitars and some playful electronics. Soulwax aren't above including themselves in their own mixes and we can a taster with their song Saturday.

Next we get the rocking section of the mix and I mean some wonderful segways from E.L.O.'s Don’t Bring Me Down right into Steve Miller's Serenade From The Stars (mere seconds of each in a "why didn't I think of that?" moment) then it's off to Hot Legs by Rod Stewart, only to finish abruptly with the Flying Lizards cover of Jimi Hendrix's Purple Haze. This is a very short section but - wow - it's great fun.

Things mellow out again with a couple electro songs using the Soulwax mix of Kolk's Uma as an intro to the Serge styled Joe Le Taxi.

Things pick up again with My Beatbox by UK's Deejay Punk Roc (something I certainly would love to follow up on) and some vocodered vocals mixing into another highlight of this disc with the chanted vocals of Basement Jaxx which itself uses a mix of the Selecter's On My Radio - which will get your ears dazzling in a trance.

There's nothing quite as nice as Donna Summer's first great song - and I Feel Love is used to great effect by Soulwax to get things really moving into a Disco/Hard techno mode. Moloko and Jamiroqui are both is meshed over Donna's and Giorgio's rhythm. You can really hear the Chemical Brothers' New Order influence on display.

We get the massive rhythms of Pharaoh Monch with his massive hit among the rap/club audiences mixed into The Jerky Boys prankster-ness mixed with Eminem's My Name Is which is a riot but has quite a bit of profanity's. A favorite.

Next up is another great section of rocking beats and mixes (note the bass motif?) which will leave you breathless. Mostly based off Marrs' Pump Up The Volume but also using the classic anti-war song 19 by Paul Hardcastle.

The mix gets into a holding pattern at this point with my least favorite mixes.

Luckily, my least favorite section of the mix is short-lived and we are back to work with some killer bass during the Soulwax ID, LRD's Jaques Your Body, Freq Nasty's Boominbackatcha, the Dust Brothers' Shake Your Rump and Alex Gopher's Party People (the Soulwax Remix) for some get down bass slapping booty bumping party mixes.

This mix was featured on 2 many DJ's pt. 2 and while it is creative it sounds old to me now.

I've heard this mix a lot too - it was included it on the Best of Boom Selector vol 2 and is included here in almost its entirety.

I had a lot of fun revisiting the early days of the Digital Underground - I just wish more of it was included.

By now a trademark of Soulwax - we get a shift into late 1960s over the top jazzy pop with the obscure Roy Keating's take on Jesus Christ Superstar which mutates successfully into Cassius' La Mouche, and then into the cover of Isaac Hayes' slab Love Can't Turn Around by Jackmaster Farley from 1986.

Next up we get the finally of Radio Soulwax Part 4 - with the hard beats of Disco (the Soulwax Remix) by Zita Swoon mixing like a dream into Brian Auger & Julie Driscoll doing it up on Indian Ropeman. The moments we are waiting for by Soulwax - and a great way to end the disc as things wind down into the Brit-pop of Das Pop's Electronica For Lovers. Fade to black....end of cd... same time same place next week....