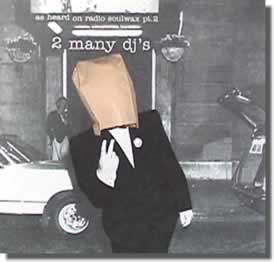 Bootlegs have gone legitimate, at least in Belgium with 2 Many DJs (aka Soulwax, Belgian brothers David and Stephen Dewaele) bringing us a compilation of what one might hear on their radio show, Hang the DJ, on Studio Brussels.

Bootlegging, which has taken off in Europe in a big way, has thus far not hit the US shores in quite the same fashion, but with cds like this finally becoming available, it won't be long before a craze will take place.

The general idea of a great bootleg: combine two disparate and dissimilar tracks usually of different genres, seamlessly combining the vocals of one with the rhythm track of another so tightly together that it becomes a new song all together.

Originally, bootlegs were just that, illegally compiled from source material culled usually over the internet - The Best bootleg in the World....(reviewed in a previous Gullbuy review) was a bootleg of these bootlegs, compiling the best they could find by downloading and pressing up a limited run of cds.

2 Many DJs is a different beast all together. From the get go, all of the tracks were licensed and cleared properly (and it's very interesting to see who would not let their tracks be cleared... Beastie Boys, Beck, Chemical Brothers, Nirvana, Pixies...the list goes on....check out the website for more details on all aspects of this cd). I think what makes this cd more of a winner compared to The Best bootleg in the World.... is that there is simply a lot more of what we like to hear here, where the Best bootleg had some lame mixes (about half the disc was pass-up material), 2 Many DJs is chock full of incredible mixes, with only one right turn into lameness (and this is only for about a minute, of Dolly Parton's 9 to 5).

The truth is that with a roster which includes Peaches, Velvet Underground, Sly & The Family Stone, Iggy & The Stooges, Residents, Breeders, Cramps, Vitalic and the ever necessary Adult, New Order and Felix Da Housecat, 2 Many DJs is the perfect combination of Rock, Electro, Funk and Soul - all dosed up in equal measure and all supplied at the right moments to keep the compilation interesting for the whole hour.

The entire compilation has a big sound - reminding me of the rock stopping blocks of the Chemical Brothers and the electro beasts of Felix Da Housecat mixed with the fuzz out fuzz of the Cramps or the Peter Gunn theme (sounding like a rocking Fall) and spiced up with fresh vocalizing of Basement Jaxx, Peaches, Velvet Underground, Salt N' Pepa, Destiny's Child, and Skee Lo. It's about time music was made fresh again, and by genre hopping AND creating a new animal of song, 2 Many DJs keep the party rolling.

I'm sure when the chips are down we will see this as the beginnings and just the tip of what's to be, but what was started 20+ years ago by the likes of Grandmaster Flash and continued in the 90s by Evolution Control Committee is finally getting an overdue recognition.