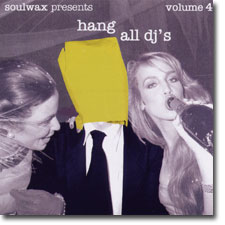 Hang all dj's are two brothers from Belgium. David and Stephen DeWaele have woven some of the most interesting musical collages I've ever heard. They have been able to transcend the bootleg/mashup craze that first brought them attention. After releasing a bunch of CDs as 2 many dj's, they have started releasing compilations as hang all dj's. The reality is that both of these alias' are one step away from the true passion of the brothers - the band Soulwax.

Soulwax have released 2 LPs that landed well below the radar of everyone I know. I once saw one of the CDs for sale (cheap) in the used bin at Tower, but I figured it couldn't be them, and missed out on it. Ther third record will be released (soon) to a far different reception, I will bet.

Volume 4 of the hang all djs series brings as much joy as earlier volumes. There are many tracks I had never heard. I am curious about CJ Bolland, whose Sugar Is Sweeter sounds like Le Tigre. I never knew Shirley Ellis by name, but her The Clapping Song is instantly recognizable, and is one of the highlights of the disc.

I have enjoyed Bohannon since David Day at the short-lived Cambridge MA Other Music store turned me onto him as the source material for the Smith & Hack LP 'Tribute.' Hamilton Bohannon's I Wanna To Sing has the best intro going, and is part of this volumes power play of I Wanna To Sing, Lyn Collins Think (About It), and Roxanne Shante My Groove Gets Better. These three tracks slide together to make one killer set.

The only track I tend to skip over in this disc is the Sex Pistols Anarchy In The UK. While I recognize how great that song was, I was too close to it years ago and can't get a fresh look on it (too played out for me). The oddball on the set is Queens of the Stoneage Regular John, which fulfills the same roll that Been Caught Stealing did on Volume 3 of the series. Regular John fits well on the disc, but it stays around in the mix way longer than many of the other tracks which I would have liked to hear more of.

The "pulled out of a hat" track is Electric Light Orchestra's Sweet Talking Woman. You can even hear the needle struggle as it tries to negotiate a particularly worn set of grooves on the LP they took the song from.

If you want to know what Soulwax the band sounds like, Soulwax appear on the comp with the Frank De Wulf remix of Saturday. Soulwax sound like a regular band - they do not sound like a 2 many dj's record come to life. I sure hope their record is good!

As with most mix records they have put out, Michael Jackson makes an appearance with Human Nature. I never knew this song, but found myself looking at the sleeve of the record to find out who it was. I had thought it was Zoot Woman! I like this track, and think that the Wedge Boy remix may be a part of the reason. The way the song segways into easy listening classic Strings of a Pint by Stella Heads is excellent.

The last few finale songs of the disc are very good. Beck Sex Laws is followed by the (David Hasselhof 70s TV show) Knightrider Theme. Next is Da Best Club by 50 Emotions. This track incorporates the disco/soul song The Best Of My Love (don't know who to credit for it). The last track is a bit goofy but fun. Neil the Hippy's Psychedelic Song has commentary as Neil listens to a spacy jam track.

Hang all dj's volume 4 is not spacy and is definitely not boring. It is a great kick, and is another strong candidate for you to spend your hard earned cash on in the store.