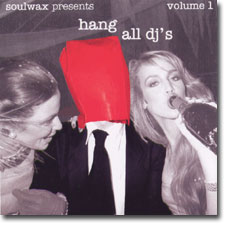 Stephen and David, the 2 guys who as Soulwax produce a radio show which spawned five volumes of 2 many dj's compilations, have begun a new series called 'hang all dj's.'

Before you read any further, I am telling you that this CD is fantastic. While some folks have recently started jibing the 2 many dj's series as having too much music of the moment, 'hang all dj's' is filled with classic rock and hiphop gathered and used in very clever and respectful ways. It is not an electroclash album.

The songs used in this sixty three minute compilation spanning 42 songs make full appearances - they are not just tasted upon in a Stars On 45 way, as Trevor Jackson did in his (excellent) Playgroup Party Mix CD. The songs on 'hang all dj's' sound as if they are in their original form - until you look deeper and realize that they have been completely reinvented as new tracks.

This disc is completely a gas. Every Soulwax record I've heard is great. I have received so many emails to the gullbuy asking me where to get these records. Those of you who have looked for these compilations: please keep trying - they are well worth the search.