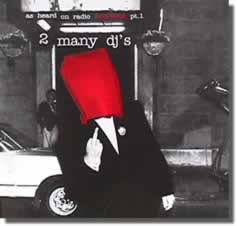 The first in the 2 MANY DJs series of bastard pop and Soulwax is definitely leading the pack when it comes to the quality mash-up.

While the other compilations on the market help by including the full mixes, it is the 2 MANY DJs series which rises to the cream off the top by putting the various bootlegs into a stew of a mix which is made for this day and age of short attention spans and for the dancefloors of the world.

Part one of 2 MANY DJs is most definitely the place to start because it includes what have now become crucial bootleg mixes, mixed into its 50 tracks - some of them as short as 20 seconds while others are the full-length mixes. There might be better mixes in the future but considering this is the first of the bunch this is a mighty fine effort. There are quite a few names I found which I now want to dig into more like Breakestra, Hanayo, Klein & MBO, and Janis Jay.

1. We start out with another copy of Salt n Pepa's vs The Stooges Push It Like a Dog (Soulwax remix) - after a short introduction. I've heard this one on many of the bootleg compilations and while it's overplayed for me now it's still a great starting track.

2-4. Felix da Housecat's Silver Screen Shower Scene revisited again - definitely the most compiled track in history - mixed with a couple of tracks by Bobby O called She Has a Way/I'm So Hot For You.

5. Madonna's Vogue - which I haven't heard in awhile, mixed to perfection with electro rhythms and bass as a 30 second intro to.....

6. Daft Punk' Aereodynamics - which sounds more dated than Madonna - using a squelching noise to buildup to some backwards rhythms.

7. The Beatles Sgt Peppers Lonely Hearts Club Band - I love when they mix Beatles tunes (or 60s tunes in general) so as you can guess a favorite of mine: this is an awesome mix for 1 minute with some prime record stopping stops and starts mixing quickly into.....

9. Which continues into the French pop of Amoureux Solitaire by Lio - which has some really sweet styled vocals circa 1986.

10. Missy Elliott's Lick Shots bring things back to modern vocals ever so provocatively and ....

11. Missy continues to sing over the Elastica song Connection in a more rocking but still sensual mode.

12. Basement Jaxx vs The Clash continue with Magnificent Romeo sounding a little fresher than the Best Bootleg's copy thanks to the improved sound quality.

13. The Jamie Starr Scenario Welcome to the light is a minute and twenty seconds of 80s synths.

14. Probably my least favorite mix on the compilation is State of shock by The Jacksons, but luckily Jamie Starr Scenario song comes back into the mix and the rescue.

15. A Radio Promo by The worlds famous DJ team - is the first in the sampled in segments without music and is a funny phone call-in and mixes directly into....

16-17. The acapella version of the Beach Boys version of God Only Knows mixed with Michael Jackson's Billie Jean and is one of my favorite mixes here.

18-19. Shake your body down by Carlos Morgan is a reggae shake your booty number and moves right into Shadow Boxing by Nasty Habits an echoed electro beat.

21-24. Into the stars (firebirds remix) by Alpha Wezen is white funk and mixes into Modern Love by David Bowie which of course mixes into Footloose by Kenny Loggins - now why didn't I think of that? I love the way they mess with the Kenny Loggins riff really twanging it out. This mixes directly into Givin' up by Hairy Diamond for mere seconds.

25-27. There' a pretty clear break into the The Strokes vs Christina Aguilera Stroke of Genius which was also featured on other bootleg compilations but has never sounded clearer than here. near the tailend of this tune we hear a bit more of Footloose which melds into Hide U by Kosheen and then into the melodrama of Hate me now by Nas.

28-30. A change of pace with Anasthasia by T99 with its orchestrated synths is used as intro to the rocking blast of Marilyn Manson's The Beautiful People minus any semblance of lead vocal. This rhytmically mixes right into the Lesley Gore- like vocals of Fly too high by Janis Jay on a Donna Summer's styled disco treat.

31-32. It must be fun to mix (or destroy) Wanabee by The Spice Girls because we get the Soulwax mashup next and it's only a few seconds long and makes for a good intro to We don't give a damn about our friends by Girls On Top - which is the longest track here at three and a half minutes and uses a Gary Numan song for a rhythm - a highlight indeed.

33. Hypnotized by the Notorious b.i.g. is used to breakbeat into Let Me Clear My Throat by DJ Kool for some of that live Stax-influenced/reggae rap singing with various rhythms getting busy underneath for good measure. One of my least favorite mixes on the compilation because the crowd noises get a little annoying for a three minute song.

34. Cramp your style by Breakestra bring things back to style with a funky 60s instrumental with some bad-ass horn solos.

35-38. Another of the voice only samples about placing sandwiches on a turntable leads right into the Japanese electro of Joe le Taxi by Hanayo - a real highlight for me. This moves seamlessly into Dirty talk by Klein & MBO (an 80s disco hit and yet another highlight for me) and then onto The Beach by New Order.

39. The Beach continues as the rhythm for the Basement Jaxx's Jus 1 Kiss but it somehow sounds separated from the other songs listed above. This pumps along wonderfully for three minutes.

40-42. It began in Afrika by the Chemical Brothers breaks into the mix for a minute eventually leading us with echoed effects into the The Disco Boys feat. RB and Born to be alive for another minute of a snapping and tight funky rhythmic instrumental. This breaks into a brief (15 seconds of) How'd I do dat? (Chicken Lips remix) by Bentley Rhythm Ace.

43-44. Next up is the retro Groovy Baby by The Microbob Ensemble with another highlight for me with the ending voice over. This mixes into yet another favorite of mine and the modulated beauty of The Beatles Lady Madonna laid under the all too brief Up the Par by Domino - a mere 35 seconds.

45. Smells like booty with Destiny's Child vs Nirvana is up next and has been featured on the other bootleg compilations and is always a standby for its effective mix. Somehow I think Kurt would have been proud.

46. Dubbreaks is a remarkable 19 seconds of a brilliant mix of different kinds of beats which has to be heard.

47-50. Another promo for the Soulwax show leads into the electro squeaks of I don't care by the Lazy Dogz and is another highlight for me. This mixes directly into a minute long mix of Playgirl (the soulwax remix) by Ladytron for a brief appearance which mixes directly into ....Paul Simon. That's right the compilation winds up with the relaxing beats of an electro mix of Late in the Evening by Paul Simon - and it is a fitting ending to 2 MANY DJs - As Heard on Radio Soulwax pt.1.