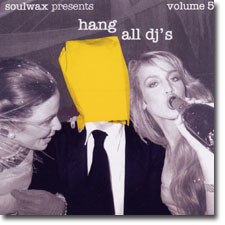 Volume five of the hang all dj's series has some segments that have been among my favorite of any of the five 2 many dj's and five hang all dj's discs Soulwax have released.

The disc starts right off with one of them. Tracks 1-4 have the feel good disco sound I have really been loving, but know too little about myself to track down and find. The intro to the disc has Luke Skywalker in dialog with control, panicking "Is there anybody out there? I'm within range of the reconnaissance vessel but I'm hit on my left front stabilizer. I'm switching circuits to compensate, but its gonna take some time. I need those fighters!" "The fighters are locked to your coordinates, stay on target for the rendezvous" "I'm losing stability - I can't shake em. I'm gonna switch to - " "77 are you there??" "77 do you copy?"

The music kicks in, and it is classic first wave disco from Rose Royce, complete with the cliche ray gun disco sound effect. Jimmy Caster starts with his slightly vocal story, with "bubba-dum" vocals sounding like muppet's Cookie Monster. Raphael Saadiq puts the final hook in me with a fantastic song that captures me as strongly as The Undisputed Truth (with What It Is?) did in Howie Bs 'Another Light Night' or Roy Ayers did (with Everybody Loves The Sunshine) did in Jazzie J's recent 'Soul II Soul' compilation, Raphael Saadiq's song sounds like Stevie Wonder in parts, but has the voice of Raphael in the talking parts.

Tagged onto the end of this track is the theme from the 70s/80s European children's show Colargol about a teddy bear. This show aired in many countries and had its theme recorded in several languages. the version used here is in French. These four songs make up my favorite segment of this disc.

The fifth song by Mr. Oizo vs. Tone Loc is good, but it sounds like it is talking about spiking someone drink with something called Medina. I don't know what it is, but it doesn't sound good, and I pass on this track.

Songs 6 - 12 make up the second segment I love. Funk Heads has a rock guitar and a guitar driven funk passage that I recognize. their track segways into Michael Jackson's Billie Jean combined with the lyrics of a Soulwax song Saturday. Everyone knows that the DeWaele brothers love MJ. I think it is very fine that they combines one of their own songs with Billie Jean. The Residents are amazingly worked into the mix at this point, before De La Soul. This leads to the most classic disco song, Saturday Night Fever. While this track may have made you groan at some point of your life, it fits here so well! McFadden & Whitehead have a series of shout outs that are very fun to listen to, and don't become obnoxious after hearing one or twice. The song includes a segment where Earth, Wind & Fires Shining Star refrain is slightly re-written into "Saturdays for you to see, what your like can truly be." Cassius ends this segment with a female vocal track that has a lot of energy.

The Beck remix of Sexy Boy is next. It is OK but not one of my album faces. Next is Lrd with Soft Machine. I love this track, and it is my favorite track to play alone (as opposed to playing a cluster of tracks). The vocal sounds a bit like Phil Lynott in Thin Lizzy. The song is like electronic metal, but it works here. The segway into Ray Bryant is extreme, switching from metal to piano based jazz.

My least favorite segment follows next. It is a Jerky Boys styled phone dialog by someone who was supposedly mistreated by a dentist. We are up to track 17 now. 17 and 18 work great together. Axel Bauer is French pop. His song leads into a soulwax mix of The Beatles. Both cuts are well done. The Freak Power song is the only track you can't play on the air because of curses. T Rex 20th Century Boy follows, and is OK, but just kind of sits there without seeming to find a place on the record.

Next is a mashup of Justin Timberlake and Dead Or Alive. It is well crafted, but not one of my faves. The song by Them seems to stick out in the same way as the T Rex track. The next three tracks are a segment I like. Coldcut goes into Jedi Knights, which go into Zita Swoon. All three tracks are killer.

I skip over the two Beastie Boys tracks, the early LL Cool J track, the Jackson 5 medley, the Placebo, Talk Talk, Sly Fox, and Malcolm McLaren tracks, and stop for the last segment - the five songs comprising tracks 34 - 38. The children's Alphabet Song starts off this cluster, and Dakar & Grinser end it with their version of the Stooges classic.

The CD calms down to end with the beautiful Shirley Bassey version of Light My Fire, and the anthem Stop Trying by Macy Gallagher.

This volume of the series has very many disco styled get up and go tracks that make it very upbeat and quite delightful.