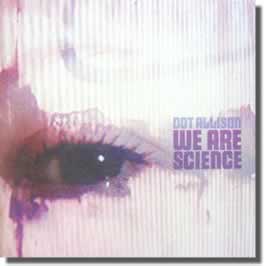 Nearly ten years ago, the Manchester-based group One Dove released its debut album, Morning Dove White. Two specific features of One Dove made the group succeed (at least for a couple years): the flawless production work of Andrew Weatherall and the evocative, sensual vocals of Dot Allison. After three great singles, the trio broke up, and four years later the Scottish singer recorded and released her debut solo album, Afterglow. It fit into a popular sound of the time that combined trip-hop with pop.

Dot Allison's follow-up, We Are Science, sees her moving to the same label as St. Etienne (Mantra Recordings). There's an immediate difference between the two albums. She has changed her attitude as a musician, which is reflected in her new look seen on the album sleeve. Darker lyrics and the dramatic mix of musical flavors parallel her change from being a glamorous chanteuse to a determined musician with serious facial expressions, and a tomboy-like, cropped haircut.

The album has no two songs that sound alike. There seems to be too much variety and not enough pulling everything together. In general, the lyrics are not especially noteworthy either. Out of the ten songs on the album, I especially enjoyed 'Strung Out' and 'Substance,' the first single.

'Strung Out' has a more catchy rock feel to it which works well. And the latter sounds very 'current' with its danceable 80's beats, synths, and Donna Summer-esque vocals. A slightly comparable song, 'I Think I Love You,' has beats that sound like early Le Car and very much like the Fischerspooner song, 'Natural Disaster.'

Undoubtedly, Dot Allison has been lucky enough to work with some great producers for her work, and her voice sounds angelic and beautiful. It just seems as though she could have used more direction in order to build a better focus for this sophomore effort.