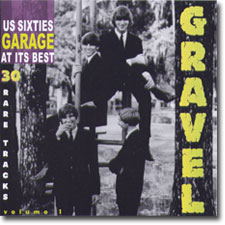 Gravel Volume 1 is the first in what hopefully will be a series of rare and ultra obscure garage rock from the 1960s. The series starts out strong, thanks to a fine mix of unreleased acetates, some hard to find sides and a handful of regional garage rock (from locales like Texas and PA) that have been compiled on other garage rock comps.

There's no doubt that Kumquat May Records decided to put together this series (limited to only 500 copies) based around the 5 unreleased alternate versions and acetates and a few of the astounding uncompiled tracks which are the main reason to get this compilation because they are fantastic. It helps to have a slew of other great garage rock to go along with those rarities. I only wish the compilation came with liner notes to help understand just how great the music is here.

There's nothing quite as exciting as finding unreleased acetates - and when those acetates contain fiery, pounding garage rock it's even better. The 5 unreleased acetates found on Gravel Volume 1 include Yesterday We Laughed (an alternate version) by The Cirkit, And You Believe Me by The Fabulous Courdels, I Want You by The Thorns, Gonna Find A Way by The Jagged Edge, and an alternate version of Baby As Time Goes By by The Moon-Dawgs. And all five of these songs are incredible with only The Fabulous Courdels being a little less than fab.

The original version of The Cirkit's (from Indiana) Yesterday We Laughed was originally released on the Unicorn label and has been compiled on the Quagmire Vol 2 compilation, but Gravel Volume 1 starts out with an incredible, rocking alternate that sounds like the drums are battling it out with the singer and that is worth the price of the entire compilation. There's ripping guitars, scorching vocals, and shaking rattling drums to accompany the whole thing and it just totally rocks.

Another unreleased tune is the fuzzed out rocker called I Want You by The Thorns which has an incredible harmony backing vocal, fuzz guitar and a raunchy lead vocal which is quite close to plea-perfection.

The Jagged Edge's Gonna Find A Way is an upbeat unreleased tune that sounds like The Pretty Things with harmonica and organ battling it out as the vocalist looks for a way out. You won't find better rhythm guitar than this track.

The original version of The Moon-Dawgs' (from New Orleans) Baby As Time Goes By was originally the b-side to You're No Good on the Bofuz label in 1966 and can be found on Highs In The Mid Sixties #13: Texas Part Three - but here we get an organ drenched alternate version which is incredible.

My least favorite unreleased track is called And You Believe Me by The Fabulous Courdels which just has some offkey vocals - other than that the scream before the instrumental break and the rhythm is really sweet.

A truly amazing obscurity which has never been compiled and is highly sought after is Houston, Texas' own Thursday's Children - whose Dominoes was originally the b-side to their Air Conditioned Man released on the International Artists label (the same label for the Thirteenth Floor Elevators). This sounds like a garage pop tune that could've been created with the Bosstown sound thanks to its grooving guitar riff, faltering rhythm, handclaps and harmony vocals. Sadly, Jan Pedersen, the lead guitarist and lead vocalist of Thursday's Children, died in 2003 in a freak windsurfing accident, and Texas lost one of its unsung garage rock pioneers. How this band went under the radar for so many years is unexplainable.

The Blue Boys' I Know is so rare apparently only one copy exists. It was the a-side to a single with the b-side being Hey Ho (not included here) released on the Feature label out of Wisconsin. I Know has amazing fuzz guitar, pumping organ that would make Elvis Costello quiver, a rock solid rhythm and guitar solo break and a shouting chorus of I know! that pump the song along perfectly for the laid back, sexy lead vocal. An amazing gem and if it truly is as rare as all that, I'd be mighty curious to hear the b-side (maybe on later volumes of Gravel).

The Secrets' Somethin Good For Me is a raw sounding tune which has some real inspiration buried in its somber tones. There's also a really sweet guitar solo - and it's another super rare 45 which has never been released on a compilation.

The Trolls were a highlight on the Storm In The Garage boxset with their fiery cover of The Rolling Stone's Stupid Girl and gummy and upbeat tune called I Don't Recall. Here we get to hear the previously uncompiled track They Don't Know that is a catchy tune half way between gummy call and response and the driving garage rhythms.

Next Stop's I Said No has never been compiled and it's a shame because this tune is a sweetly effecting one that steals the more plaintive riff from The Beatles Daytripper (someone needs to make a list of the songs that steal riffs from the Beatles).

The Spacemen's Run For Your Life is one of the weirdest Beatles' covers I've heard in awhile - it almost sounds like a song poem at times, as it starts out with an almost Polynesian rhythm before bursting into a loungey fast paced vocal. I'm not even sure if they are singing the whole song - it's hard to tell since they re-wrote the music for the song completely.

Buck Rogers Movement's Baby Come On was originally released on the 21st Century label in 1967 and was also available on part 5 of the Son Of Gathering Of The Tribe compilation series. It's got another loungey vocal but this time with a more tense organ based melody. Buck Rogers Movement was a local Massachusetts band that featured local indie legend Ray Mason . Another MA band featured on this comp is Del Rays Inc. - whose bluesy I'm A Lovin' can also be found on Grab This and Dance on Spectra Sound Records.

The Grim Reepers' Two Souls is another tune that reminds me of The Pretty Things manic thing, them Van Morrison Them sound or hints of Mick Jagger rolling. Two Souls can also be found on Garagelands volume 1 (where you can also hear their song called Joanne) or Highs In The Mid-Sixties Volume Two - L.A. '66 Riot On Sunset Strip. It's a song that never gives up and has a super fine sound.

I've Seen Darker Nights by the PA band Facts Of Life was originally the a-side with All In Good Time (not included here) which was featured on the Crude PA compilation LP and was covered by the modern garage rock band The Thanes from Edinburgh, Scotland. It starts with a fuzz intro before going into a droning, haunting garage rock melody with a cool organ solo.

Interestingly, The Counts' Night Of Misery was also covered by the Pterodaktyls from Edinburgh (a band who are friends of The Thanes). It's a great tune that totally sounds like a Holly Golightly tune sung by a guy (Holly must cover this one someday).

The Beau Gents' Three Letter Word is one of the most complicated garage rock songs this side of The Count Five's Psychotic Reaction, with its stops and starts, changes of rhythm and different melodies. It also has a fantastic fuzz guitar solo that will blow you away.

Another song with some awesome fuzz is Sons Of Sound's He's Gonna Ride which combines the fuzz guitar with echoed vocals and trippy organ for a wacked out melody. There's even some more Beatles' allusions buried in this fuzz masterpiece.