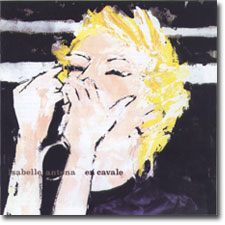 Isabelle Antena, whose real name is Isabelle Powaga, started musically in the early '80s with her involvement in the three-piece, Antena. For En Cavale she expanded the band and wrote the majority of the songs, at this point she renamed the project Isabelle Antena, as all of the principal members of the older band are involved in the newer, larger project.

This is the sound of Isabelle broadening her reach and listening to other influences. She is steeped in Brazilian Jazz and Funky songs. It is significant that Isabelle is French but the album is wholly sung in English. Some of the lyrics to the songs reflect this difference. It was recorded in London and presents more of an international feel. However, this forward looking atmosphere was not readily accepted by English-language audiences. One has to travel further to the Far East to find Isabelle Antena's largest audience.

Isabelle has gone on to become a best selling artist in Japan. This album prefigures a lot of the wave of acid jazz bands that came from London in the 1990s and became very popular in Japan. Isabelle's merging of international jazz sounds with contemporary electronic percussion and lyrics in her second language give the album an 'open' feel. The majority of the songs deal with common occurrences from a very European perspective.

That said-- the album still has a very mid-80s feel to it. Another note-- because i fear people will make this comparison-- Isabelle Antena is not similar in sound to Madonna, none of Isabelle's lyrics have a juvenile preoccupation with sex, hers is a more mature work.