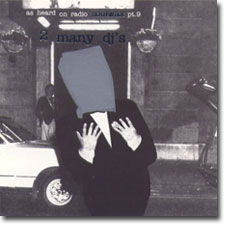 Part 9 of the hang all dj's series gives enough treats to make it worth seeking out.

Early volumes in the series had a lot of mashups: tracks with one song's music and another track's vocals. On later volumes the joy became the way odd musical choices were woven together, with bits of new content inserted that sounded like they had been made for the song. The series also started to use a lot of movie dialog. Star Wars and Michael Jackson became recurring themes.

Just as with other volumes in the series, there are clusters of tracks that I think work best together.

There are a few tracks that I have already developed sensitivities to and cannot hear again, such as Electric Six Danger, High Voltage, Peaches F The Pain Away, and The Rapture House of Jealous Lovers. There are some tracks I just don't like, such as the Queens Of The Stoneage and Ol Dirty Bastard ones, but there are enough excellent moments to make me come back to the disc again.

Among my favorite moments are the 2 Op:l Bastards tracks, Crockett's Theme (from the 1970s TV show Miami Vice), and the disc intro by Luis Luis.

All said and done, by now you probably know what 2 many dj's and hang all dj's offer and you love them or don't care for them. If you DO love them, this is another CD you will want to own.