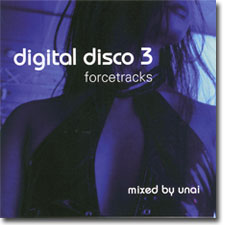 It's been 3 years since the last Digital Disco compilation on Forcetracks, and a lot has changed in that time. Most of the established artists that appeared on the first 2 Digital Disco compilations (Luomo, Dub Taylor) have moved on or become less prolific with the passing of time and now that Forcetracks is back, the label needs to reinvent itself with some new artists. This comp does that with the help of Unai.

Unai (aka Swedish producer Erik Møller) also released his latest album A Love Moderne on Forcetracks. Digital Disco 3 is a good but faceless mix filled with artists (Premature Wig, Soultek, and Crystal Fake) that had 12 inches on Disco Inc. (the label the folks at Forcetracks created after the fall of EFA, its distributor), a couple of established artists (John Tejada and locally grown DJ and artist Morgan Page), a couple of new Forcetracks artists with newly minted 12 inches this year (Igor O. Vlasov and Crane A.K.), and a few other artists (Drei Farben House, aka Michael Siegle and Sonar Kollektiv artist Âme ).

Stemming from the artwork, which was photographed at the World of Sex in Frankfurt, Germany, the music on Digital Disco 3 seems geared for the strip clubs. The song titles even, seem to tell the story of one of the strippers you might meet at a club (with titles like She's on Drugs, Lonely World, Basic Needs and Unprivate).

Unai is known for his glitchy, soulful dub, so he adds that sound throughout the mix. The glitchdub is most apparent in the opening track She's on Drugs by Premature Wig which gets the mix off to a strong start. The mix seems to coast after this with Morgan Page's Outside the City (the Voltique remix), a bubbly synth dub; Jussi Pekka's Basic Needs, a phasered out dubhouse workout; and the lonely Tiga-like techvibe of Soultek's Lonely World - all blending for a blurred night out and a so-so listening experience.

More Jussi Pekka, Premature Wig, and Soultek come later in the mix too and only the glitchbomb of Premature Wig's Place Detection stands up next to the Unai tracks and mixes.

John Tejada's Voyager has a swinging booty shaking sound that doesn't disappoint, but it's the type of song that gets the bodies writhing in the clubs, but is somewhat embarrasing to listen to alone. Crane A.K.'s Sputnik adds some (unintentional?) Germanic comedy relief when he sings "I can feel my antenna" in a Sprockets kind of way.

It's the Unai tracks and mixes that are the best of the bunch here, fittingly in this Unai mix and since A Love Moderne was such a success.

It's on the Unai remix of Drei Farben House's Unprivate, that some dubglitch magic comes back into the music (and that begins to be a theme in this mix; the best moments belong to Unai). The switch in the mix is not so subtle, but the contrast of the Drei Farben House vocal with the Unai glitchdub backing makes for something fine as it builds to a synth climax only imagined soundtracks of ecstasy at a strip club could produce.

Unai's own I Like Your Style (as remixed by Martinez) and Oh You and I (the Trentemöller remix) - two tracks taken and transformed from A Love Moderne - also combine the soulful Unai vocal (like an electronic Marvin Gaye) with the glitchdub perfectly. It's only the Unai touch which keeps this mix real.

The Digital Disco series in the gullbuy: