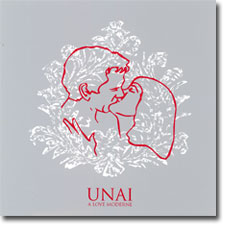 A Love Moderne is Unai's (aka Swedish producer Erik Møller) 2nd album following up Rebel Swing from 2001 on the Nusond label (a subdivison of Swedish label Audionaut). Unai's music has appeared on Naked Music presents Lost On Arrival (where you can hear his music with other funkers like Chicken Lips and Daniel Wang) and the Force Tracks compilations Digital Disco 2 and Digital Disco 3 (Digital Disco 3 was mixed by Unai himself and just released in 2006). Erik Møller has been busy because he also released a Spinform album called Bryter Tystnaden on Hobby Industries in 2006.

This is the first full length release on Force Tracks since Luomo's The Present Lover, Dub Taylor's Experience, SCSI-9's Digital Russian and Håkan Lidbo's Data 80 all came out 3 years ago in 2003. Force Tracks disappeared for awhile when the EFA distributor went under, forcing the label to release a few 12 inch singles the past few years as Disco Inc. So it's a nice surprise to see the label back with such a solid release.

A Love Moderne is a minimal dub pop album with a lot of soul. Erik Møller may not have the greatest voice, but he found his inner Marvin Gaye and really lets loose here, combining a laidback, minimal dub backing with a disco soul inspired vibe where his vocals are tweaked and buried perfectly.

The vocals are soulful (sometimes even augmented with subtle harmony vocals like in I Like Your Style), but aren't too distracting from the overall minimal dub that he's laid down underneath the vocals. Every once in awhile the songs disappear into a glitched out haze, but that never detracts from the overall proceedings. And while you may not be singing these songs to yourself later, the way this is setup, with subtly soothing soulful vocals tweaked and buried and fractured song structures, with the warm vibe that Møller is able to get by combining that with the glitched minimal dub will make you crank things up.

Hopefully there will be other Force Tracks' releases like this one soon.