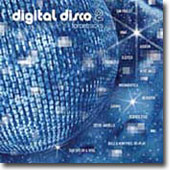 Disco will always be a dirty word, but it does well in describing the route that many Force Tracks artists have been taking in recent years. Dub Taylor, Hakan Lidbo (working with D:Exter here), and MRI are all reliable Force Track artists who made their appearances on the original Digital Disco compilation last year and join us again on Digital Disco 2. They are joined by outside artists like Luomo and Ian Pooley - and with the added bonus of some lesser known Force Track artists like Adjuster and outside guest Steve Angello - Digital Disco 2 is a better and more exciting compilation than its predecessor Digital Disco.

Things get off to a one - two punch with the three opening tracks. Dub Taylor already had me excited thanks to his excellent full length Experience. The Casino Royale mix of Your Soul with Vital on vocals is an incredibly strong opening track and is also much hotter than the album version. The bass just leaps out of the speakers, and I definitely think this is a track that would persuade those who have been thus far unwilling to join the darker side of modern disco. It's addictive, propulsive, soulful and yet it is not a cliche. One of the great mixes of the year.

Luomo has always been well documented on compilation cds, and Tessio (the Moonbootica Radio Edit) is no exception. While it may have a more dumbed down electro-styled bassline than the preceding track, the song is almost as propulsive in its own way.

I'm usually a big fan of all things Hakan Lidbo, but I found myself less than thrilled with the Adjuster mix of D:Exter's Things Have Changed (Hakan wrote and produced the music and D:Exter wrote and sings the songs) . I think the Adjuster mix loses the tenseness which is evident in the original mix which seems to pulse and modulate along with D:Exter's vocals; the Adjuster mix keeps his voice steady and doesn't come across to me as quite as emotional. It should be said that this Hakan Lidbo song has Hakan's use of simplistic lyrics (like he's done with Data 80) and this time out he uses a male soulful singing voice to get across the lyrics.

One of my personal favorite tracks is Moscow Disco by Adjuster. This is owes a debt to French House like Etienne De Crecy, one of my all-time favorites which explains my fascination with this track. Repeated motifs of drenched house music, batting back and forth in a frenzy of ecstatic dancechords: probably too chaotic for the dancefloor, but not for my head.

The other highlight for me is Feel Good by Steve Angello. A repeated vocal line which repeats "Feel....good.... let me make you feel good, woah!" is messed with to a glorious end. At 8 minutes long this track rides the glide of night into the nether regions of climax, reaching an apex in the mixing deck.

There are a few less than stellar tracks - like what is that track Join Me Brother by Afro Angel from 2001 doing here? (even if it is a rare white label 12 inch, single, it still sounds like 2001 to me). But even with a duff track or two - at 79 minutes this compilation is chock full and the best tracks here really make this an amazing compilation.

Force Tracks in the gullbuy: