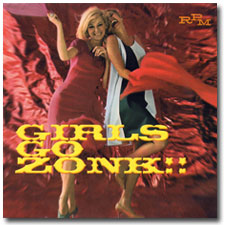 The RPM label from the UK has taken a break from the Dream Babes series which spotlighted British girl group and girl singers from the 1960s, and under the learned girl group collector hand of Mick Patrick has set their sites on these here shores of the USA. Girls Go Zonk, according to the liner notes is "a fab collection of rare and hard to find US Beat Chicks and Harmony Honeys of the '60s" and it hopefully is also the first in a sister compilation series to the Dream Babes series.

Girls Go Zonk collects various productions by the likes of Brian Wilson (The Honeys and Sharon Marie), Kim Fowley (The Murmaids), David Axelrod (Donna Loren), Jack Nitzsche (The Satisfactions), Scott Walker (Margie Day), Perry Botkin Jr. (Debbie Burton), Gerry Granahan (Diane Renay), and Lester Sill and Steve Venet ( The Twilettes). Along with these fantastic productions we find some super fine girl singers like Jamie Carter, Roberta Day, Darlene McCrea, Josephine Sunday, and Verdelle Smith. And finally there are a handful of girl groups to round out this cd with The Pandoras, The Kane Triplets, The Tammys, The Dynels, and The Victorians, along with a couple of incredible (and highly collectible) Shangri-las sound-a-likes like The Girls and the previously mentioned Satisfactions. There are very few cases where these songs have been collected recently on cd - and for the most part I think a lot of this music has never been collecting properly on cd at all, so it's a real delight to have all of this fine music collected together in one place.

We've heard the two Brian Wilson productions recently; both The Honeys and Sharon Marie tunes appeared on the Pet Projects - The Brian Wilson Productions - The Honeys have been all over the place in the past few years with Honeys Collection from 2000, Pet Projects in 2003, and now here but this no doubt that they are a favorite for girl group collectors. They are heard here on Brian's Phil Spector influenced The One You Can't Have. Sharon Marie is heard in her tune Run-Around Lover and it's a real shame she was not heard from more because she has a really sure, Cher-like delivery which could've given Cher a run for her money because not only is Sharon more personable, she's also not as manly sounding.

Donna Loren was best known for starring in the Beach Blanket Bingo movies. In fact, her one LP released was called Beach Blanket Bingo. A Collectables Best of cd was released in 2001, called Beach Blanket Bingo: The Very Best of Donna Loren (which was preceded by a lengthier gray market disc just named after her debut record) and included the cd set opener (from which this compilation derived its name) called So, Do the Zonk - an under 2 minute dance craze song which is a fine intro produced by David Axelrod. Donna is definitely under-rated for a beach blanket babe and is worth investigating for 60s girl singer fans.

Diane Renay released a fantastic self-released 2 cd set called Some Things Old, Some Things New in 2001 that you could buy from her website. Dynamite from 1966 was included there, but for those who missed this fiery piece produced by Gerry Granahan (best known in the 60s for producing The Angels' My Boyfriend's Back and actress Patty Duke's platters), Gerry brings out the best in Diane and augments her vocals with some organ swells and marimba.

Chico's Girl by The Girls has been a favorite of girls in the garage 60s music for awhile now - it's been included on the Girls In The Garage, Vol. 1 (cd version, Vol. 2 in the LP version), as well as The Brill Building Sound box set (from 1993, long out of print). it's probably the ultimate The Shangri-las' sound-a-like and is heard here in the best version.

The Satisfactions could also be The Shangri-las or The Goodees under the guidance of Jack Nitzsche on Daddy You Just Gotta Let Him In. The music combines the feel of Then He Kissed Me with the rebel love drama for hell's angel's in a devil boy's kiss.

Margie Day's Tell Me In The Sunlight was written and produced by Scott Walker (then known as Scott Engel) and John Stewart (aka John Maus) around the same time as their stint as The Dalton Brothers and before they had become The Walker Brothers. In fact, Scott worked with Jack Nitzsche around this time. Walker Brothers' fans might be surprised by the little girl voice of Margie Day (a similar version of Tell Me In The Sunlight was recorded for acetate by Bonnie & The Treasures, which has that little girl voice sound too), but they won't be surprised by the galloping production, soaring arrangement or the subject matter, especially if they are aware of The Dalton Brothers Spectoresque version of the PJ Proby song I Only Came To Dance With You.

Anyone who enjoys the lighter side of the girl group sound will love The Victorians' You're Invited To A Party. This would sound wonderful back to back with The Kittens' Don't Let It Happen Again or The Pixies Three.

There's always been that connection between The Cookies and Lesley Gore's vocal style - beyond just the fact that they both did versions of The Old Crowd. Don't Worry Baby by ex-Cookie Darlene McCrea from 1964 could well be the mature sound of mid-60s Lesley Gore or a lost Cookies track. Darlene McCrea did rejoin The Cookies for their final two singles in 1967.

Kim Fowley had a number 3 hit with The Murmaids' Popsicles and Icicles in 1964, but it was not the same Murmaids heard hear on 1968's cover of Traffic's Paper Sun. This is much more the dry run for the all girl punky mayhem of Kim Fowley's 1969 production of The Clinger's Gonna Have a Good Time with fuzz guitar and the off kilter late 60s song structure.

The Pandoras were one of the first all girl rock bands in 1964 (playing all of their instruments) from the Boston area. Here we get to hear a quite sought after single called Games they recorded in 1967 - it was written and produced by Bob Stone (best known for producing Cher) and was also recorded but not released by local Boston band Teddy and the Pandas along with Toni Wine. It's not an earth-shaking girl rocker, but I think fans of Beach Boy melodies would like it.

The Starlets do bring on the girl power on You Don't Love Me which is a definite precursor for Billy Childish and Thee Headcoatees and Holly Golightly (This was also included on Girls in the Garage, Vol. 1 on Romulan, but I wonder if it sounds so clear as here). That makes sense since Davie Allan (from Davie Allan & the Arrows) plays the mean sounding buzz fuzzed guitar heard on this Starlets tune.

Josephine Sunday's You Won't Even Know Her Name was written by Mike Curb (who used Davie Allan on all of his exploitation soundtracks) and was also released by The Starlets as their first single. It doesn't sound like Davie Allan is playing on this wonderful Spectoresque production of a sweet vocaled plea of a song.

Debbie Burton isn't much of a singer on Next Day - she's more of an actress in song a la Peggy Lee's Is That All There Is? with an ebb and flow in emotion: things aren't so bad as too be suicidal or depressed for Debbie (whose best known for appearing in Whatever Happened To Baby Jane? along side Bette Davis - even singing a duet with Bette!). Debbie's produced here by Perry Botkin Jr., who later worked with The Lettermen, Harper's Bizarre, The Electric Prunes  and The Mojo Men. Here he's working with a young Harry Nilsson, with whom he co-wrote this song for Debbie.

Patti Seymour's The Silencers will please the 1960s soundtrack collectors. It's the theme song from the Dean Martin movie - any fans of Ann-Margret's style could do worse than check out this sole recording rescued by RPM.

Jamie Carter's The Boy With The Way starts out unassumingly, but soon picks up with some amazing hornlines and tension. Jamie's vocal style could even be considered a precursor to new wave vocal styles from the late 1970s/early 80s, which makes for interesting listening when she's heard that way. I could hear Cyndi Lauper working this one; Jamie ended up writing a million selling hit for Cyndi (Change of Heart), in fact (many years after her stint as Uncle Meat with Frank Zappa).

Lester Sill was best known for his partnership with Phil Spector, owning half of Philles Records with him (the label that put out all of Spector's amazing Wall of Sound music in the early 60s); Lester Sill was also the inspiration for ASCAP’s West Coast Songwriters Workshop which is now known as the Lester Sill Workshop. Lester produced The Twilettes' Where's My Baby along with Steve Venet (Screen Gems writer and Nick Venet's brother - Steve wrote many songs with Toni Wine for the likes of The Ikettes and Shirelles) in 1963. Where's My Baby has a classic gospel styled chorus which brings to mind the end of the innocent girl group era and the beginning of the Vietnam era as they collided circa 1963-64.

Verdelle Smith's Tar And Cement is a beautiful folk ballad about growing up, leaving home to move to the city and losing one's past to loneliness and disconnection. It was originally done in Italian by Adriano Celentano (who wrote it, as Il Ragazzo della Via Gluck) and performed in a British version by Caroline Munro (a Mark Wirtz production), in a French by Francoise Hardy (as La Maison oů j'ai Grandi) and in German by Camillo (as Der Junge aus der Gluck). It's a real heartbreaking song and anyone who likes the sound of Francoise Hardy or The Poppy Family should check it out.

I'd been curious about The Kane Triplets ever since I heard about them - I mean a triplet singing sister group from the 1960s? How heavenly - if done right - and they do the mission impossible - by singing the Them from Mission Impossible in a hyper go-go manner which is the perfect combination of blaring and paranoid. A beauty!

An alternate version of The Tammys' Egyptian Shumba ends this RPM collection - The Tammys sang backup for Lou Christie but they are really let lose on this rollicking dance craze tune that The Bangles should have covered to follow-up Walk Like and Egyptian. This would be a different world....

other related RPM compilations in the gullbuy: