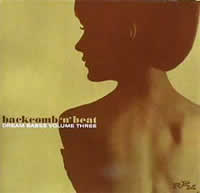 By far this is the most exciting Volume in the Dream Babes series. Rather than look at the recordings from major label releases, Volume Three concentrates on the 60's British Girl Group recordings made by independent producers including Shel Talmy, Joe Meek, Giorgio Gomelsky, Tommy Scott, John Carter, Mark Wirtz, Miki Dallon and Pierre Tubbs. Compiled by the Dream team which consists of Bob Stanley, Kieron Tyler and Mark Stratford - this collection really digs into the vaults for some wonderful sounds.

1. Sweet And Tender Romance - The McKinleys We start out with a bang and some awesome female vocals mixed with distorted blues guitar. Really a nice surprise with this combination that sounds like it has a really raw Jimmy Page guitar solo in the middle of this one.

2. Lying Awake - Dany Chandelle Next up is this multi-sectional song cycle - an amazing Mark Wirtz production which makes a curiosity out of the echoed guitar combined with the unique drum sound and an inspired Phil Spector-esque Wall of Sound which all send this one soaring. In 1965 Mark Wirtz was experimenting a-plenty and here's one of the great payoffs.

3. Come Tomorrow - Peanut Peanut is back and singing what sounds just like a Beach Boys melody to me (from Pet Sounds). That alone makes this one a winner. Peanut's voice combined with the wonderful banjo-esque solo make this sweet number a real keeper.

5. Someone Cares For Me - The McKinleys

Strummed start and stop rythtms send this one soaring into Phil Spector Wall of Sound land. Add an amazingly sweet melody and you've got a great one! Originally released on cd on the crucial Touch the Wall Of Sound cd.

6. Gonna Get Burned - The Chantelles Here's a driving tune by the former Lana Sisters from when they regrouped after Dusty Springfield had left their ranks. Crucially under-looked, with a handful of amazing singles put out from 1965-1968-ish - I'm so glad to see them finally make it on cd.

7. I'll Forget You Tonight - Cheryl St Clair* One of Bob Stanley's (from Saint Etienne - as detailed in Clenbuterol #15) faves - this one has a Walker Brothers or Dusty Springfield feel to it. Wonderfully orchestrated and organic sounding - truly unique for the era.

8. We Don't Belong - Sylvan A piano driven pounder with a mysterious vocal by Sylvan - a pretty sweet death song with bells, tension, eery horn solo. what a find.

10. Go Ahead - Samantha Jones There's a wonderful vocal on this upbeat soulful number, 'Go ahead and hurt me....'

11. Mickey - Twinkle Yes, one of my fave tunes in the past weeks shows up again. I love this piano pounding singalong.

12. Two by Two - Perpetual Langley This one sounds just like Petula Clark with a hint of French YeYe phrasing when she says Two By Two - thumbs up from me.

13. How Many Times - Judi Johnson Upbeat horns and odd rhythm start this one out quite uniquely. There's a nifty organ solo and Honeys' like background vocals adding to the pot.

16. Lonely Room - Cloda Rogers A folk-inspired number with pitter patter drums representing the pitter patter of the singer's heart and an 'accordion feel' to string/flute arrangement which actually reminds me somewhat of early Jethro Tull because of the complex arrangement.

17. I've Heard It All Before - Jennifer Lewis & Angela Strange Here's counter-pointed folksy understated dual lead vocal which reminds me of the Cake a lot. Every so often there are some horn flourishes to remind me this is British.

18. Give Him My Love - The McKinleys This is another folksy number which also reminds me of the Cake. Sweet stuff.

19. I Know You Love Me Not - Julie Driscoll Julie does a Dusty sound-a-like - with a Brian Wilson styled orchestration. This is probably my least favorite track on the compilation because it seems like she could've worked on the vocal a little bit more.

20. If Trees Could Talk - Samantha Juste This is the other Bob Stanley favorite and what sweet upbeat girl pop it is - I love her accent. What a find! Bravo!

21. Someone's Gonna Be Sorry - Peanut Peanut gets folksy on this blues banjo strummer with a big beat and Lesley Gore styled vocal.

22. Yours Sincerely - Jan Panter We end the compilation with this folk rocker which has a plucked guitar melody and a swarming string arrangement and a galloping beat.