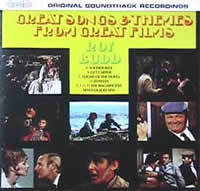 Originally released on LP format in 1971 (which explains it's short length of 34 minutes), this reissued cd (in 2001) collects together a handful of Roy Budd's work from various film scores including Get Carter, Flight Of The Doves, Zeppelin Soldier Blue and The Magnificent Seven Deadly Sins.

At the time of its original release it was the first place you could find anything from the Get Carter soundtrack (which was not released properly until 1998 also on Cinephile).

Starting out this collection are three songs from Get Carter - which is a wholly unique experience in cinema music and well worth checking out. The Get Carter theme sounds elusive: instrumentally combining harpsichord, double bass, tablas, and electric piano which could bring to mind either Herbie Hancock or The Doors' Riders on the Storm all the while while roaring sounds of trains run through out.

Getting Nowhere In a Hurry brings to mind the downer side of Hair with its plodding piano melody and female voice: 'What's the point in all the Hurry?' 'Really Live it Up until we Die'. The final feeling is uplifting though, thanks to the let's party attitude and upbeat harpsichord solo. I love the harpsichord solo in this one!

Love Is A Four Letter Word has the same female voice but is more lounge, upbeat, pounding, perfect for that had a few at the pub but still raring to go feeling.

The rest of the cd is sort of what you'd expect - kind of like the incidental music from Get Carter. The best being track 4, Track 7 and Track 8. The Soldier Blue theme has a Beatles' Let It Be feel to it, while Fields Of Green And Skies Of Blue is perfectly cinematic starting out as a piano ballad and kicking into a wah/wah guitar/harpsichord workout - cool slow cinematic style.

Envy, Greed And Gluttony is a nice workout with flutes and Roy's piano kicking it together. Lust is a fitting title - because it sounds like music you'd hear in a strip club in the early 70s!

All in all this cd helps round out the picture for the Roy Budd fans.