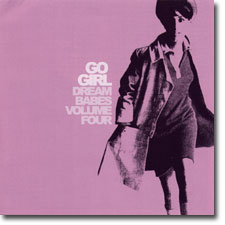 The Dream Team this time around have centered their attention on the groups, the superstars and the Northern Soul Classics. The groups included are - The Chantelles : with a whopping 5 tracks of their delicious vocal mayhem; The Orchids aka The Blue Orchids in the States and The Exceptions when they tried to lose that schoolgirl image that producer Larry Page tried to tag them with - here The Orchids are all school girl fun all of the time at the tender ages of 14 and 15; The McKinleys whom continue their reign of sweet and tender girl group sounds which started on Dream Babes Volume 3; and The Breakaways , one of the most prolific girl group singers in the UK. The Dream Team have also turned the raised spotlight on the super stars turned singers - including sides by Twiggy , Linda Thorson (who played Tara King of The Avengers television show), and Ross Hannaman , the face of the year 1968 and Mark Wirtz's wife. The final thread of girl group sounds the Dream Team delve into is Northern Soul classics by including tracks by Jacki Bond , Paula Parfitt , and Janie Jones .

The Chantelles' fans get a treat: 5 songs - a virtual goldmine for those who have worn out the grooves to the many fine 45s they released throughout the mid-60s.

Starting out the collection is The Chantelles powerful rendition of the obscure Sadina song I Want That Boy , which mixes Riss Chantelles sensual drawl with the other Chantelles crazed backing vocals to create compulsive listening. Gonna Give Him Some Love is a go go get him kind of a tune. Please Don't Kiss Me is as sweet as the title of the song infers, as The Chantelles sway through the vocals. I Think of You is a loungey number which will stir your martini for you. The final Chantelles song is a dreamy, odd one from 1973 called Another Time Another World , which points to the musicals that Riss and Nola York worked on after The Chantelles passing. Now here's hoping the final Chantelles single, released in the US only as The Chantelles (of London) will be reissued on cd soon.

Love Hit Me by The Orchids has that American girl group sound that The Orchids mined so well, with it's driving beat and girl-ish vocals. One of the supreme highlights of this set is the phenomenal Mr Scrooge by The Orchids , which was used in the pop movie Just Like You , where The Orchids performed next to Freddie and the Dreamers , Peter and Gordon and The Merseybeats . What a mighty little gem of a song which i'm sure you will be singing to yourself long after it's finished playing. Gonna Make Him Mine has a more rocking guitar driven beat, which sounds like it has The Kinks on the backing, which wouldn't be surprising seeing as Ray Davies wrote one of The Orchids songs (not on this compilation) and The Kinks backed the girls up when they toured.

The McKinleys have two songs on Dream Babes Volume Four - When He Comes Along is a sweet song, the A-side of their second song, and was written by Geoff Stephens (who also wrote The Crying Game ). It sounds like an Everly Brothers tune sung by girls. The second McKinleys song is the dreamy That Lonely Feeling - a song that sounds like it could've been written by Jagger/Richards (you know that love they had with the girl group sound early on). It was the B-side to Sweet and Tender Romance (a highlight from Dream Babes Volume Three ).

The Breakaways have a full cd forthcoming which centers wholly on The Breakaways output. Right now we get two of them. Sacred Love is a fuzzed out piece of psych girl group nirvana, that reminds me of the uber-cool 60s girl group The Cake . I love that fuzz and the yearning sound. I Can Hear Music is a wonderful Mark Wirtz production of the Barry/Greenwich/Spector tune which is just one of the great late 60s songs to combine music and love so incredibly. I can tell that Mark Wirtz was enthralled to be working with The Breakaways on such a gem of a song, and all involved have done a tremendous job.

I was mighty surprised at just how great the Twiggy songs were - and to think she doesn't even remember recording them! When I Think of You is a groovy, amazing gem with brassy, low horn lines, violin trills and Twiggy's sure but untrained voice rising to the occasional. I can wholly imagine the dancefloor rumbling to this offbeat number. Beautiful Dreams is a dreamy, driving number which ends the compilation and is nothing to sneeze at either - a total collectible of the dream babes variety.

Paula Parfitt's Love is Wonderful is a swoony affair with Northern Soul classic written all over it. If you don't get a little parched and smitten from this tune, than you need a tune up, because this tune is definitely up.

Ross Hannaman gives us a wonderful Marianne Faithfull impression on Down Through Summer - a Tim Rice/Andrew Lloyd Webber song. Linda Thorson's Here I Am and Bad Time to Stop Loving Me are both soulful Brit girl numbers. She's no Dusty Springfield but these are both fine. Janie Jones give us what she is great at on Go Go Away from Me - a sprinting go go rock song. The Time Has Come To Choose , an unissued Janie Jones song is a treasure of late 60s groovy British soul. Jacki Bond's He Say has an early girls sound but it's her version of Reviewing the Situation from Oliver (and done by Sandie Shaw on an album of the same name in 1969) which has me pressing replay over and over again. One of my favorite finds, and now I'm mighty curious to hear the Sandie Shaw version too.

Dream Babes is an incredible series of girl group music which came out in the UK in the 1960s. While I wouldn't say this series is crucial for everyone - I would definitely have to say that it is crucial for those who have jumped headlong into the girl group sound and are hungry for more. For those girl group fans, this is a treasure trove of some groovy 60s girls. And the series gets better as it goes along.

Dream Babes in the gullbuy: