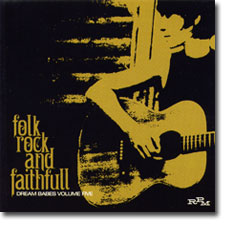 The ever controversial Dream Babes compilation series reaches volume five with one of the best volumes yet. I think I say that about each volume that comes along. I've come to realize in my travels that the Dream Babes series is not everybody's cup of tea. Whether it's a question of people's tastes when it comes to defining what girl group music from the 1960s truly is; or if it has to do with something deeper: I think the Dream Babes series is an ever fascinating adventure because it spotlights what actually was happening back in the heyday of the 1960s. Rather than look back through fog colored glasses by putting a twist to the times to make it seem like it's one thing, Dream Babes leads us the other direction: it was many things.

This go round, Dream Babes presents Folk Rock and Faithfull. The play on Marianne Faithfull's name is telling. Even though she's not included here, her folk rocking influence is heard throughout. Mostly a British phenomenon is presented of course, since RPM is a British label (as are the label compilers, St. Etienne's Bob Stanley, Mick Patrick, Kieron Tyler, and Mark Stratford), with a few foreigners from California (Jackie DeShannon when she was visiting London), Germany (Nico, heard here recorded in London before her fame with VU in NYC), and Australians (unknown Aussies, Maggie Hammond and Gemini). Other than that, we get Brit born and bred - The Caravelles, Gillian Hills, Phillipa Lewis, Twinkle, Jennifer Lewis and Angela Strange, Vashti, Leonore Drewery, Caroline Carter, The Chantelles, Angelina, Judi Smith, Gay Shingleton, Ruth, Trisha, and Greta Ann.

First and foremost, this compilation is worth every penny to finally hear The Caravelles 1967 single Hey Mama You've Been on My Mind. I'd been making do with a muddy cd-r copy of this incredible Spectorian folk rock gem. The Caravelles are best known for their early 1960s hit You Don't Have To Be A Baby To Cry. I'd been dying to hear the highly sought after Hey Mama You've Been on My Mind for as long as I can remember, and to finally hear it in crystal clear cd sound is awe inspiring. Not to be confused with the Dylan tune Mama, You Been on My Mind, The Caravelles' song was probably inspired by a similar Dylanesque vision, but doesn't ape him at all. It's a soaring, wonderful piece of folk pop.

If you've heard Nico's cover of Gordon Lightfoot's I'm Not Saying from her Immediate years, you actually have a good idea what a lot of Dream Babes: Folk Rock and Faithfull sounds like. Recorded in London by Rolling Stones manager Andrew Loog Oldham for his Immediate record label and featuring both Brian Jones and Jimmy Page on guitars. I remember the first time I heard it, I was quite surprised how different it sounded from her later recordings. it's a gem, if you've never heard it.

Jackie DeShannon was all over the place in the 1960s - and I guess she was visiting the UK (shagging Jimmy Page, who knew?) when she recorded the stomping Don't Turn Your Back on Me. Since Jackie also wrote Marianne Faithfull's huge hit Come and Stay With Me (not included here), it makes sense to include Don't Turn Your Back on Me, which is in a folk rocking vein. Judi Smith also covers the Jackie DeShannon/Jimmy Page composition Leaves That Come Tumbling Down, which bounces along with an autumnal stride and is fittingly beautiful for the equally stunning Smith. Gay Shingleton also covered the DeShannon/Page composition In My Time of Sorrow - a far cry from Page's later Zeppelin rip-offs; In My Time of Sorrow is not a stolen folk blues song (as the title even suggests), but rather a wispy piece of female voiced folk rock with drama and poise.

Another Page tune Get Along Without You (this time written with Gay Shingleton) is covered by Phillipa Lewis. A lower toned vocalist, Phillipa's voice is deep, but not without a feminine charm. The french horn solo adds a depth to the musical backing, which pounds along behind Phillipa while she relives the drama of getting along without her lost lover.

Caroline Carter recorded the DeShannon tune The Ballad of Possibilities, a beautiful song with hammered dulcimer used in a pop song setting. It sounds like a lost PF Sloan tune, really wonderful.

Vashti also recorded for Immediate Records, but here we hear her singing Train Song and Love Song from an EMI/Columbia single from 1966. Vashti's got a dreamy, mysterious sound which chugs along in a Francoise Hardy styled way. Train Song is a bit more upbeat, and my favorite of the two songs. An album called Just Another Diamond Day was also recorded, and reissued in 2000, which I believe has just about everything the mysterious, wispy Vashti recorded. Fans of Linda Perhacs or Nick Drake should check Vashti out.

Vashti helped Jennifer Lewis and Angela Strange record their single - and the two girls bring a dulcet stride to Bring It to Me, while You Know could well have been recorded by any number of C86 twee Brit bands.

Reading about Gillian Hills in Cha Cha Charming Magazine made me both curious and apprehensive to hear her music. Sheila seemed very opinionated about her various recordings, which made it seem like she'd be all over the map style-wise, and somewhat so-so quality-wise. To be expected with a beauty like Gillian; gladly however, I can report that her folk rock song Tomorrow Is Another Day included here is wonderful. Not at all the in your face Ye Ye I was expecting, this is dreamy and sweet, precious vocals about walking in the sand in a dreamy kind of way.

Twinkle tries her hand at a rollicking take on the P.F. Sloan / Steve Barri tune What Am I Doing Here With You. When is Twinkle not rollicking? Well, this time she's not singing about death, and there's more emphasis on the folk strumming guitars of course, but she's also helped along with some fiery horns too.

One of my all-time favorite tunes on Dream Babes Volume Five is 87 Sundays by Ruth. Little is known about this previously unreleased song which was an acetate discovered in a Glasgow charity shop. This could even be included in your next Christmas playlist, especially if you are into a lonely Christmas vibe.

The Chantelles (of London) have always been a favorite Brit girl group of mine (they are members from Dusty Springfield's first girlgroup, the Lana Sisters). Ris Chantelle has a voice perfectly suited to the folk rock sound, and it's truly the highlight of the previously unreleased Weeping Willow. The musical backing and background vocals seem a bit scattered; but I love to collect Chantelles songs, even sloppy unreleased songs.

Trisha sings a quiet, quaint Donovan song called The Darkness of My Night, a song he never released himself, so Donovan fans should check this one out.

Greta Ann's Sadness Hides The Sun sounds like the theme to a Western - plucked guitars, crazed Western styled wordless backing vocals and soaring strings: it was written by Eric Woolfson who later was in The Art Movement and The Alan Parsons Project. Closing credits, exit the theater, until next time.

Dream Babes in the gullbuy: