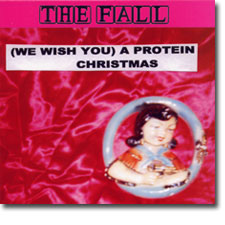 Even though it is well part Christmas, the '(We Wish You) A Protein Christmas' EP by The Fall is too good to leave unopened till next year.

The Fall have been relevant since 1977. I'll bet that with some concentration you can name another artist around that long that is still relevant (Billy Childish), but the list is surely well within counting on your fingers, possibly those of a single hand.

The Fall created a sound that was popularized by Glasgow bands like The Yummy Fur a few years ago, and Newcastle on Tyne labels like Slampt. There were many bands that used the style: single note (as opposed to chords) guitar melodies and stylized talking instead of singing is the description I would give the sound in a nutshell.

Through the years Mark E. Smith became famous for changing the members of The Fall for almost every release, and there have been a lot of releases. He also made the fall an electronic techno styled band long before it was fashionable, and made them an angry rock band again when it was.

This EP has 4 songs, all of which are interesting and well recorded, even if a bit mad.