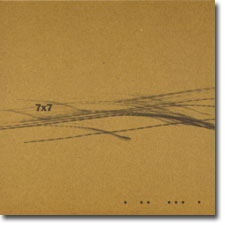 Neil & Iraiza is the duo of Hirohisa Horie and Gakuji Matsuda.

Anyone who saw Cornelius' tour this past Winter saw Hirohisa Horie playing guitar. Last year he also played in Sketch Show (ex-YMO) when they toured. Hirohisa Horie has shown up on records by many other J-pop artists as well.

Gakuji Matsuda is Cubismo Grafico, one of the most beloved of J-pop artists.

Neil and Iraiza have been recording and playing together since 1996. Their music is guitar based pop, kind of like a smoother Guided by Voices or a calmer Hideki Kaji.

This single is their first release outside of Japan, on England's Ochre Records. It is part of the 7x7 series on Ochre: seven 7inch singles released in similar sleeves, with a special box to put them in if you subscribe to the series through the Ochre Web site. Each single in the series comes in colored wax, each one a different color. The Neil and Iraiza single is a pastel green shade. It features two songs from their Escalator Records LP 'New School.'

This Is Not a Love Song is not a cover of the PIL song. It is a short (just over two minutes) song with a foot tapping beat and a very upbeat feel, made even more solid by the vocal melody. There is a 60s sunshine pop to the song, a touch of layered background vocals, and a muted trumpet solo.

Oracle Noises has chiming guitar harmonics, even more layered background vocals, and a touch of synthesizer used in a way that simulates nature sounds. Oracle Noises is also short (just under two minutes).

There is not much music on this single. Both songs are over way before you wish them to be. Even so, the single sounds pretty great to me.