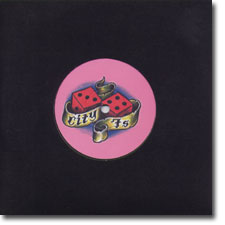 Kid & Khan is the duo of Kid 'Congo' Powers and Khan. Both have huge histories.

Kid Congo has played with many bands. Some of the well known artists he has made significant contributions to are Nick Cave, Diamanda Galas, Michael Gira, Make Up, The Fall, Die Haut, Lydia Lunch, and The Cramps. I really liked his 1997 band Congo Norvell (with Sally Norvell).

Khan has released records and singles on many labels, including two records on Matador. My favorite release from him is the 12inch of Ride Me on Cheap Records.

Kid & Khan played here in Boston a year ago at TT the Bears. This single is the first they have released as a duo. It is also the first release of City Rocker's 'City 7s' series.

The A-side is a cover of the Ronnie Cook song Goo Goo Muck. The B-side is an original called Talk Dirty. Both songs have the dirty reverb laden picked guitar melodies that Kid Congo has always done so well, and similar electronics by Khan. Both tracks are vocal trashrock with attitude. Goo Goo Muck also appears as the last song on disc 1 of the City Rockers compilation 'Futurism 2.'

I like Talk Dirty the best, as it comes to me with no baggage from the past, and it is such a heartfelt bed of sleaze.