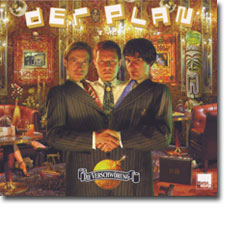 When Der Plan originally recorded in the early 80s their sound was quite different than everyone else. They were a trio from Düsseldorf Germany that sang in German and used lots of dissonance and electronics in their sound.

The Der Plan sound does not sound radical anymore, but it does sound good. I think that this disc is a real treat, similar to the new Mission of Burma disc that thrilled so many fans here in the Boston area.

The 2004 version of the band consists of Achim Treu, Moritz R and John Jones. Moritz is an artist with many outstanding works you can view online [the art of Moritz R].

I like Copyright Slavery, which uses children's voices in the same was that Andreas Dorau did on the 1984 Die Doraus & Die Marinas song Fred Vom Jupiter. The vocals are being sung in German and English, saying

Software you can steal
ideas are free
copyright slavery

I also like the track Drinking From A Hidden Spring. It has a sound kind of similar to J-pop's take on Exotica, with voice samples and many odd sounds woven into a high energy collage held together with a swinging bass part and rhythm.

A half dozen tracks are instrumentals:

Some tracks have computer treated vocals, such as Deutschland Bleiche Mutter, Chemiebaukasten and Rot Gelb Grün.

Milka-Kalb is an odd track with fairy voices with the accompaniment of a piano.

Ulrike is like a mutant version of the 1977 Eno / Snatch classic RAF, from the flipside of Eno's King's Lead Hat 7inch.

Deutschland Bleiche Mutter, Hohe Kante or Dunkel Wars could have been on a 2002 Electroclash compilation. Der Plan's sound predated that idea, and has endured beyond the collapse of that sound as a trend.

Many of the tracks make me thing of the Popshopping compilations. As subversive as Der Plan were, it looks like the present world has finally caught up to their past, and a new Der Plan are right there to have some fun as part of the bargain.

Der Plan in the gullbuy: