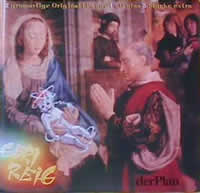 A Reissue of 2 records by German band Der Plan on one disc.

In 1980 Der Plan released 'Geri Reig'. It was an incredible record that was unlike anything else happening then. It used some of the ideas that Clock DVA, Throbbing Gristle or Cabaret Voltaire used, but it put the otherworldness into a pop setting, and kept the vocals sung in German.

If you read the gullbuy often you will have heard me compare bands to Der Plan. Even in 2001 the sound on this record comes across as modern and individual. 1981 saw the release of 'Normalette Surprise'. It was a crazy record - half of it played at 33 and the other half at 45.

Kleine Schlager-Revue (#22) steals the show for me on 'Normalette Surprise', but unfortunately it has a section in the middle of it that you cannot play on the air - no curses outright, just a woman explicitly decribing what she'd like done to her.

Sie Hat Mich Verlassen (#19) sounds like it taught Stereo Total a bit about song construction. Of the bonus tracks, Wir Werden Immer Mehr (#33) is my fave.

Der Plan's music is not meant to be comfortable. They were and are challenging. This disc has their best stuff. Play!