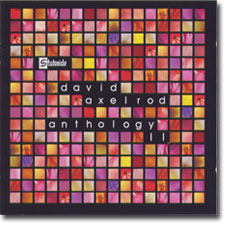 Much of David Axelrod's music is getting unearthed these days (like his work with The Electric Prunes) after years of being sought after by the disc jockey breakbeat collectors, but to give some much needed perspective on this talented arranger and producer the UK label Stateside put together 2 Anthologies of his work (Anthology 2 is reviewed here).

Both anthologies collect together very rare sides he produced and arranged for Capitol Records in the late 1960s/early 1970s for Cannonball Adderley (saxophonist who played with Miles Davis), Ray Brown (jazz bop bassist), David McCallum (TV star from Man From U.N.C.L.E.), Don Randi (leader of fusion group Quest), and Lou Rawls (the soul singer who followed up on the Sam Cooke sound), as well as songs from David Axelrod's own albums: Songs of Innocence (1968), Songs of Experience (1969), Earth Rot (1970), and a track from The Big Country album from 1995. Anthology 2 is arguably the more exciting of the two volumes thanks to David Axelrod himself getting involved in its conception.

For those of us who might have been curious about this time period in music when jazz and funk were joining together to create a new popular music thanks to the work of jazz greats like Miles Davis, the work of David Axelrod is a sure extension of this movement in music. David Axelrod takes that amazing empty sound where less is more that Miles Davis used so perfectly, and added a soundtrack / soundscape vibe like the great arrangers of the day were doing, but where many of these arrangers these days might sound predictable, Axelrod's music sounds fresh. This vibe has definitely been caught by the breakbeat collectors, and Anthology 2 shows they are on to something.

David Axelrod's own work captured here including Song of Innocence, Sick Rose, Warning, Pt. 2, Introit/Krystallnacht, The Divine Image and Merlin's Prophecy fits right next to the work of Miles Davis, Lalo Schifrin, Quincy Jones and Don Sebesky, but it's only David Axelrod who really pointed the way to the modern soundscape mood of downbeat breakbeat rhythms so perfectly. The only time he goes astray is on I Fall to Pieces from The Big Country, Axelrod's attempt at interpreting country classics.

I've always been a fan of Cannonball Adderley's Capital Records recordings, since they are an extension of what Miles Davis was doing at the time. There's two amazing 10 plus minute tunes by Cannonball Adderley to dig into here, including the set opening Tensity which has a wonderful laidback groove and the more upbeat, live Happy People which sees Cannonball Adderley in a samba carnival mood and combining traditional Brazilian rhythms with electric instruments for amazing results.

Lou Rawls is heard on two classic soul tunes, including Dead End Street, Pts. 1 & 2 and Your Good Thing (Is About to End) where Axelrod has the perfect restrained backing to really spotlight Rawls' amazing vocal work.

David McCallum is heard on two dramatic tunes called The Edge and House of Mirrors (which was included on the Product Placement by DJ Shadow and Cut Chemist) two tunes written by Axelrod and which really just show off more of Axelrod's stuff (I'm not sure what David McCallum really does here).

Don Randi is given a shot at the Lalo Schifrin composed Theme from Che which actually has a bit of a Esquivel vibe to the plucked bass and exotic instrumentation.

The only tune I could've done without is the blaring overwrought rendition of Good Day Sunshine by Ray Brown which doesn't add to this compilation as a whole.