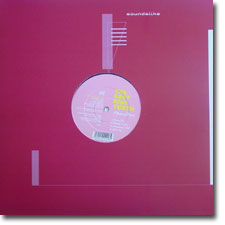 The Soft Pink Truth is the San Francisco based sample-laden disco project of Drew Daniel of Matmos. This 12inch has 4 songs from the 'Do You Party?' full length.

Two of the songs feature Drew's Matmos partner M.C. Schmidt, and one has Blevin Blectum on vocals. The songs included on this 12inch were well chosen. Each are winners.

Promofunk starts off the EP. The track is built on staccato beats in the same way that Akufen or many of the projects of Uwe Schmidt (Atom®) are. At one point there is the sound of someone sucking the last sip through a straw. For this moment I think of the Butthole Surfer song Lady Sniff (though in that song it was the sound of Gibby burping). Promofunk builds into a steady beat with bell-like sounds and vocal samples.

Gender Studies has the same type of feel as Promofunk. It is a little unnerving, as we are talking about steady beat dance music built out of many unrelated elements fused together. It makes me think of the Clive Barker story 'In the Hills, the Cities,' in which a couple on vacation discover a battle between the residents of 2 cities, each having built a giant man-shaped combatant out of their bodies stacked and lashed together a hundred townsfolk high ("Despite these malformations, it was horribly lifelike."). This may not tell you much about the song Gender Studies, but the comparison holds true nonetheless.

Everybody's Soft reminds me at moments of the LA band DJ Me, DJ You. Samples from different sources are put together to say "soft pink truth." The beat is as upbeat and snappy as a Nile Rodgers Chic production.

Make Up is my favorite song on the 12inch. Blevin Blechum sings this song about being rushed to get ready to go out - "smoke a cigarette, I'm not ready yet." She is not ready because she is still applying make up! "Blush, eyeliner, hush! see what you made me do? Face mascara, erase, I want to look good for you." The music is super synthetic, like The Normal, and the vocal is fun.

I like the sound of The Soft Pink Truth. This type of sound is active listening - it is not meant for background music. But played loud while moving around fast you will enjoy bopping to the tracks and spotting the odd sample you can identify.