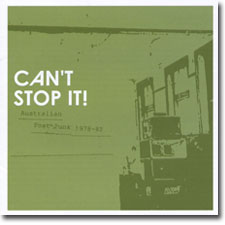 Can't Stop It is a real find - there are many tracks on it you will want to hear, and chances are you won't hear them anywhere else. The compilation covers the undergound post-punk scene in Australia between 1979 and 1982. The compiler (David Nichols) gives us the disclaimer that this collection consists only of his personal faves - It is not an attempt to chronicle the Austrailian post-punk 'scene.'

The Moodists' 1982 track Gone Dead may remind you of the song Motorcity by The Age of Chance (a C86 7inch on the Riot Bible label), but it came out 4 years beofre Motorcity.

Voigt 465 and The Take tackle the no wave sound on Voices A Drama and Summer, though their playing is tighter and more together than the typical NYC artists who defined that sound. Both these tracks are excellent.

The Apartments song Help has a guitar part that sounds like The Cure Boys Don't Cry.

Ash Wednesday are art-punks whose Love By Numbers has robotic sounding vocals counting numbers to electro-pop music like Trio (during the verses) or Andreas Dorau (in the chorus).

Primitive Calculators' Pumping Ugly Muscle sounds like Martin Rev from Suicide playing a backbeat for the guitarist of Metal Urbain.

The Fabulous Marquises sound like OMD on Honeymoons. The keyboard sound is almost a dead ringer. The vocalist sings like Bobby from Field Mice.

If any of the above sounds even slightly interesting, take a chance and buy this CD. I really doubt you will be disappointed.