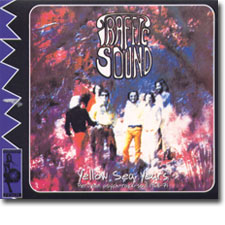 Traffic Sound sang mostly in English, and mined a hard rock sound with a Beatlesque quality to them that may well have influenced groups like Guided By Voices (if GBV were ever given the chance to hear them). And while they venture into sounds influenced by groups like Traffic and Jethro Tull, there's always some Beatlesque melodicism which keeps the sound rooted. Yellow Sea Years collects music from the 4 albums Traffic Sound recorded between 1968 and 1971.

The opening track, Lux, has a driving sound and a sweet fuzzed out bassline that grounds the melody behind the freshly scrubbed guitars. Mysterious organ and flute come in midway through to add some of that progressive rock feel, but the song never noodles.

Gusano (Alice in Wonderland) has more emphasis on the latin rhythms, and a mean fuzz guitar, while retaining the flute accents, piano led melody and that sweet latin group vocal sound.

Camita has the most overt latin sound, like a Santana outtake, with funky rhythms, and a killer electric guitar sound full of that Santana-like melody and call and response vocals.

You Got to Be Sure! is a little more classic rock sounding, but still has a vibrant bounce to it and an addictive sound.

Oddly enough, the song titled Solos is a wholly group sound, grounded in a tasty guitar riff and group vocals. It's a harder rocking sound.

Yesterdays Game starts with some cowbell inflected percussion and a Beatlesque guitar riff before heading into a hardhitting rhythm and one of the best vocal melodies here.

Sky Pilot is a sweet cover of the Animals song which doesn't add much to the original but still comes off as great.

Meshkalina has some wah wah used on the guitars and a killer rocking melody with some of the best background vocals.