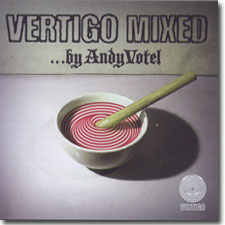 Andy Votel has had his fingers in all sorts of projects this past year from the Don Cooper retrospective to two amazing compilations ‘folk is not a four letter word’ and the ‘welsh rare beat comps on the Delay 68 label he co-runs with cherry red records Doug Shipton. Votel also runs the label Twisted Nerve with Damon Gough aka badly drawn boy. He's also a sleeve designer, a producer, a dj. It's almost ridiculous how many things this guy is involved in and to top it all off he's given prog-rock fans one truly superb mix of artists from the highly collectible Vertigo label.

The british label known for it's iconic swirl logo issued a total of 90 albums from 1969 to 1973. Just within the past year the label has garnered considerable attention with the 3 disc retrospective 'time machine' not to mention the two part overview of the label in Record Collector magazine. It might seem like Votel could just be capitalizing on all the interest but not so. The artists featured on the mix are all drawn largely from Votel's personal vinyl collection, the liner notes even give a nostalgic glimpse into the life of a young Andy Votel, scouring charity shops and spending his bus fare money on Vertigo records.

Now, if you're someone like me who has lived on the other side of the Atlantic all their life, it's highly unlikely you could ever compile a collection of Vertigo artists from visiting the nearest Salvation army. These days you'd have to do at least a couple sleep deprivation studies at the local hospital before you'd could buy at least one of the more collectible albums. Just to give you an example, a near mint copy of Tudor Lodge's lone 1971 Vertigo release will fetch upwards of 350 pounds which basically equals a ton of scratch. The mix itself omits some of the more well known Vertigo acts like Black Sabbath and concentrates on the more obscure progressive, hard rock, and jazz fusion bands that recorded for the label. Artists like Jim Croce, the Incredible String Band clones Dr. Strangely Strange and Rod Stewart's first album don't make the cut either as they would certainly break the continuity of what is a 75 minute seemless tribute to some of the most spaced out, monster riffing, heavy funking, music you've never heard. Check out Jucy Lucy's cover of Captain Beefheart's 'Willie the Pimp' the soulful voice of Linda Hoyle and her band Affinity. You'll hear percussive harpsicord, throbbing bass lines, Ian Anderson-esque flautists. There is a listing of artists featured on the back but with each song getting only about a minute of play and some pretty tight fades and mixes, it can be hard to tell if your listening to the Black Sabbath influenced Flied Egg or the Christian prog band Gravy Train. In the end I guess it doesn't really matter. If you have any interest in progressive rock, even just a little, you're going to enjoy this album garanteed, there is just too much good stuff on it not to. Luckily not all, but a good number of Vertigo bands have seen CD and vinyl reissues on labels like Akarma and Repertoire so if you are so inclined you can begin your own journey of discovering these amazing yet fogotten bands one album at a time.

Compilations by Andy Votel in the gullbuy: