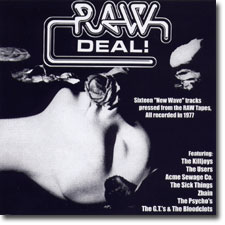 I heard rumors about this compilation of Raw Records (one of the UK's first independent punk labels) a couple of years ago, so I'm glad to finally see it available. Damaged Goods out of the UK got the rights to the Raw Records releases, and have fired off some reissues including this tremendous compilation Raw Deal which came out back in the heyday of punk rock 1977. Snotty, kick ass, raw, fiery, punk rock of the first order recorded by The Users, Acme Sewage Co., The G.T.'s, The Bloodclots, The Sick Things, The Psycho's, The Killjoys, and Zhain are all included. These groups sound as fresh as the day this compilation was originally released in 1977. I don't know a thing about these bands, except that they are incredible punk rock deserving of our time and attention. 16 tracks in all.

Favorite tracks include the opening I'm in Love With Today which is one minute and thirty eight seconds of Stooges inspired energy brought to us by The Users. The Sick Things' Bondage Boy is girl power at it's British girl best: could it be a follow-up or a companion to X Ray Spex's Oh! Bondage Up Yours? Whatever it is, it's a powerful punk rock song. The Sick Things have 3 other kickass songs featured here, including Anti Social Disease, Kids on the Street, and Sleeping With the Dead all three songs are spitfire girl punk with a killer guitar sound. Here's hoping The Sick Things have more songs that can be compiled, maybe even a full disc of some sort because they get my vote for punk rock reissue group of the year. The Killjoys' Recognition is a masterpiece of Johnny Thunders styled rocking punk rock. The Psycho's Young British & White is a political song with an edge. Message by The Users ends this compilation on the upswing, with a raw, rambunctious brittle bit of punk rock noise. Damaged Goods has done a fine job resurrecting Raw Deal for the punk rockers of the new century.

other related Damaged Goods reissue reviews in the gullbuy: