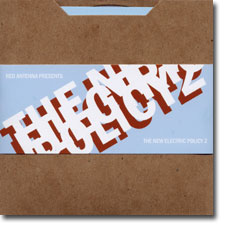 The New Electric Policy 2 collects together recordings artists who record for the Red Antenna label out of New York and includes tracks compiled by Karl Zeiss from fym, Sneak-Thief (from the Intuit Solar label), Candy Chang, sub.q, mental tsp, Karl Zeiss (himself), $tinkworx (from the downlow label), The Juan Maclean (from the DFA label), Dykehouse (from Ghostly International), DFD, Gen_Des_Com, and Self Contained Unit. According to James Reeves from Red Antenna: "we have a remarkably wide range of sound on Red Antenna: Candy Chang's polished electro, Self Contained Unit's retro-synth melodies, Tomorrowland's atmospherics, and the distilled house music of mental tsp. We're interested in artists that don't subscribe to a particular sound. Such a broad scope makes it difficult to identify Red Antenna with one particular sound, so instead we focus on a certain visual aesthetic and philosophy - and it makes us a more interesting label." Red Antenna believe in the aesthetics of music as more than simply sound for the masses, also putting thought into design and the tactileness of albums and vinyl releases.

Highlights include: Rodchenko in My Bauhaus by Candy Chang, which has a sound like WIT or a more mellow Chicks on Speed. This is one of the few overtly vocal tracks on this compilation and has a great feel to it, making me want to hear more by Candy Chang. Sneak-Thief's Unkind has a mellow vocodered vocal which has a really heartfelt feeling to it. Moleculounge by sub.q has fun computer game sounds set to a beat with vocodered and unearthly vocals. The Juan Maclean track By the Time I Get to Venus has old school disco styled rhythm with some bouncing high sounds.

Dykehouse bring us probably my favorite cut on this collection with Piss Funk - a disco-fied hot sauce mix of a song. DFD's Welcome to My World has low bass and a slinky rhythm with some subtle glitch thrown in the mix. The last track on this compilation is takethetimetofigureitout by Self Contained Unit which has percolating synths bouncing along playfully which ends this compilation on the upswing.

I haven't had a chance to hear The New Electric Policy 1, but judging from this compilation it would be an excellent collection as well. Red Antenna hold no bones about the fact that they do not want to be the next big thing, they are content to just bring to us some great music. With The New Electric Policy 2 they have done just that.