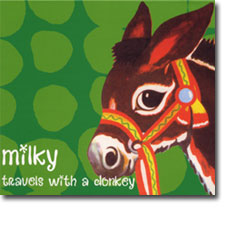 Despite first recoding in 1997, 'Travels With A Donkey' is the brand new first full length of Milky. Milky is Shazna Nessa and her ex-husband Momus. Many of you know their famous track The Emperor of Oranges. It is the only track from the past included on this record, though another song from the past makes its first appearance here (Jackie Onasis).

Shazna specializes in a Claudine Longet styled whisper, though she sounds decidedly more playful and carefree then Claudine. Shazna has also recorded for Siesta as Maria Napoleon. She has a distinctive voice that you may recognize when you hear this disc.

I like this CD a lot. There are 10 songs on the disc, and none of them seem to be filler or instrumentals. Each song feels crafted but not overworked, and most songs have lyrics that tell a story or describe something in a new way.

'Travels With A Donkey' is a strong record - my favorite Siesta album in some time, though I have to admit to not having heard recent Siesta discs. Siesta must have lost their old US distributor, as the few times I have seen new Siesta releases in the stores they have always been quite expensive.