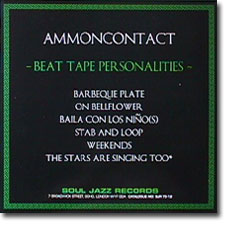 Ammoncontact are an instrumental duo from Los Angeles. Carlos Niño and Fabian Ammon refer to their music as hip-hop, but the appeal of their sound will extend beyond that of hip-hop, because of the lack of vocals and the quality of the tracks.

Ammoncontact have other releases, but this is the first time I heard them. I really like this 6 song mini-LP a lot! The record starts off with Barbecue Plate. It is a well produced downtempo track with a clean stinging bass and crisp snare. The cut sounds like tracks that I used to see in 'Beats & Breaks' sections of record stores.

The second track is On Bellflower. Subtle use of a wah-wah petal on the guitar gives the track a 70s police TV show feel. The track creates a rhythm and goes where it takes for the duration. It is OK, but not anything special. Baila Con Los Niño(s) has a salsa feel to it. There is no vocal to speak of, though there are wordless vocals such as "Woo" and "Aye Aye" that elevate the energy level. The track seems to end, then comes back for about 10 seconds of straight salsa before it ends. I like this one a lot.

The B-side starts off with Stab and Loop. This song is sharp as a knife, with clipped sounds almost like Uwe Schmidt does in many of the projects he puts out on his Rather Interesting label. The production is great, and Stab and Loop takes Ammoncontact to a different place then any other song on this mini-LP.

Weekends (Black Keys Mix) features Andres Renteria on percussion and Fender Rhodes. Andres is an LA area musician who also plays in Organic Orchestra. The song is like a studio jam tightened up into a fine track.

The centerpiece of 'Beat Tape Personalities' is The Stars Are Singing Too. This track has a timeless magic to it. You cannot tell whether it was recorded last month or three decades ago. There are soulful wordless male and female vocals, tons of percussion, lots of flute, and a lack of polish that makes the track sound like a recording of a stream of consciousness jam session. The music was performed by six people calling themselves Build An Ark. Among the many vocals and handclap players on the track are Daedelus, and Ammoncontact's own Carlos Niño.

Sun Ra and John Coltrane are 2 names I recognize from Ammoncontact's "Always there" list. The Stars Are Singing Too shows their influence. Among the many people thanked on the back of the record are Anti-Pop Consortium, Mike Ladd, Cut Chemist, Dabyrne, Dntel, Mia Dodd Todd, Scott Herren and Dublab. This may help give you some frame of reference for Ammoncontact.

Soul Jazz did good with this one. Ammoncontact say "Be peace, be creative, love is you, love is me, love is us, love is free." I simply say, check this one out.