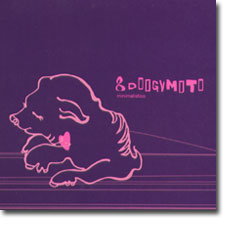 'Minimalistico' is certainly minimalist of splashy guitars and other typical indie rock outfits but is no less overflowing of musical beauty with its simple, yet melodious modern electronic music. The emphasis is on the drumbeats (i.e., drum machine) and the vocals with some occasional keyboard and guitar touches.

8doogymoto formed in 1999 and it is no surprise if the trio lives in Berlin/Hamburg because you can clearly hear the German electronic music influences. Some songs remind me strongly of Mouse on Mars while others of Lali Puna. The difference being that the lead singer, Fumi Udo , sings in both Japanese and English, whereas Valerie Trebeljahr sings in English and Portuguese.

What I find most interesting about 8doogymoto is their determination to be a band/citizen of the world. Careful selection of words helps ensure the lyrics can be understood in many languages while at the same time not belonging to any specific one.

When asked about the name of the band, Viktor Marek (drum, bass, and guitar player) explains: " 8doogymoto is based on an old Japanese fairy-tale, where 8 dogs saved a princess... But that's not the important point for us, we were looking for a name which sounds nice and which does not belong to a specific language. "

- Minimalistico , highly rhythmic, has very catchy melody that develops fairly late into the song and whose leitmotiv is the title itself. This is one of Viktor's favorites because of " the strange mixture between dancehall and electro. "

- Ookyaku also features a nice melody and is sung mostly in Japanese. It is very similar to what you can hear on the Mouse on Mars' Cache coeur naif ep.

- You can find an interesting mix of singing and talking in Tabetai . Let's say Japanese hip-hop style over groovy beats.

- Binary rhythm marks Kaelu Nouta , which is sung in both English and Japanese. Cornelius comes to mind.

- I like the melody of Palasolu and its overall clubhouse feel. It sounds more like a remix version than an original though.

- Dakewa has sensibilities that remind me of Color Filter.

This is 8doogymoto's first album on Matthew Herbert's house label Soundslike/Accidental . The first four tracks on 'Minimalistico' are impeccable cosmopolitan modern electronic songs that will totally win you over for the rest of the album. My only additional wish would be to have Fumi sing all the songs in Japanese as the elegant intonations of her native language form memorable harmonies with the highly energetic rhythm.

other related reviews in the gullbuy: