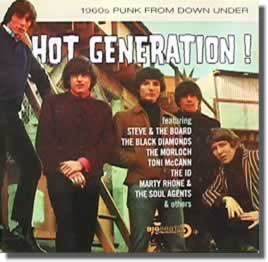 Despite there being numerous compilations of mid-60's Australian 'garage' bands released over the years ( UGLY THINGS, DEVIL'S CHILDREN, the companion cd to this volume, OF HOPES AND DREAMS AND TOMBSTONES, etc.), here is another one containing 30 more rock n' roll songs from Oz that you'll probably want to own! i am consistently amazed that they can keep finding quality songs to re-release!

Australia was (and is) a relatively 'young' country. it's population, too, was comparatively young. that might account for a certain unique type of attitude and energy you can detect in most of the songs here.

the bands of Australia didn't seem to be copying the sounds of the American bands of the time but instead seem to have been evolving on a parallel, though not any less interesting, plane. personally, i am convinced that the ferocity and anti-social undertones of many of the songs by these bands was a direct result of The Pretty Things notorious tour of Australia and New Zealand. but, that's a story for another time. for now, let's talk about some of the songs contained on this compilation.

the cd begins with the song that gives this comp it's name. 'hot generation' by the SUNSETS is a great way to start things off. the SUNSETS started out as the 'FOUR STRANGERS' but became the SUNSETS in 1965. this song was the title track to a 1967 Australian surf movie which the SUNSETS did the entire soundtrack to. at the end of 1967, the group mutated into the psych-prog-rock band TAMAM SHUD. garage rock aficionados may be familiar with the awesome cover version by 80's Los Angeles all-girl group The Pandoras.

track two features the SOUL AGENTS with the song 'i'm still mad at you' from their only 45. listen for the nice sitar-like guitar break in the middle.

Tony Worsley and the FABULOUS BLUE JAYS weigh in with the BIRDS cover 'how can it be' for track three. with the extra-dirty guitar riffs these guys throw in, i think i like this version better than the original! Tony is also featured on track 13 covering the CRICKETS tune 'all over you', but it is boring in comparison.

the lone female singer on this comp is Toni McCann, and she shows up twice. despite sounding like she's about 12 years old, Toni has a very appealing voice. track nine is her song 'no' and track twenty finds her doing the theme song to a popular Australian pop music show of the time called SATURDAY DATE.

track ten is the fuzz-heavy 'i'm gonna try' by the PURPLE HEARTS. this band was very lucky to have Mick Hadley as their lead singer, as Mick employs some Steve Marriot-like yelps to great effect on this tune!

the ID (not to be confused with the American band of the same name) had as a member the handicapped Jeff St. Johns as their lead singer. listen to his authoritative, gruff Tom Jones style vocals on the song 'watch out'! (track twelve)

the BLACK DIAMONDS had a really great guitar sound without really being 'punk'. they were more of a great pop band but one that knew how to add an edge to their sound. listen to tracks fourteen and twenty-eight to hear what i'm talking about. for those of you who care about such things, they changed their name to TYMEPIECE in 1968.

track twenty-two is a song called 'leave myself to me' by the band the SOUTHERN GENTLEMEN. it reminds me, strangely, of that certain haunting, moody, sound that mid-sixties New England bands are known for!

track twenty-nine is a singer named Peter Doyle lending his punchy vocals to a fuzz-dominated version of the SPENCER DAVIS GROUP song 'high time baby'. this is one of my favorites on this compilation. Peter Doyle later joined the NEW SEEKERS in the early 70's.

all in all, this isn't the best of all the Australian 60's punk compilations, but if you like this sort of stuff, i'm sure you won't be disappointed.