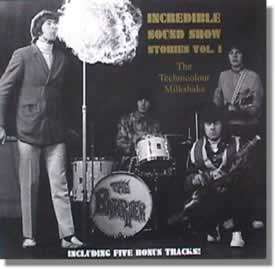 I must admit, when carl first handed me this cd to review, i was a bit skeptical, since underneath the title was the subheading: 1960's acetates/private pressings/obscurities. i feared i'd be listening to a collection of songs culled from the very bottom of the mid-sixties psychedelic scrapheap. after all, many times, there was probably a good reason why a song wasn't released in the first place. and besides, i was thinking 'how much good stuff can there possibly be left that hasn't already been mined from the treasure trove of sixties psychedelia?'

i was pleased to discover that my skepticism was unfounded, as this compilation contains many quality songs that have never been compiled before. the time period spans from 1964 to 1970, with all the bands but four hailing from the U.K. the four exceptions are represented by two american, one australian, and one german group.

the cd opens with an insane freakbeat instrumental called 'action painting' by the aforementioned germans the RICKETTS. what a way to open the cd! this song would not be out of place on that fabulous arf arf compilation of psychedelic instrumentals. you know the one.

track 2 is a raw, grinding r&b number with distinctive vocals called 'oh mary' by the PRIMITIVES, who also recorded under MAL AND THE PRIMITIVES but started life in 1963 as the CORNFLAKES. yes, the CORNFLAKES. i'm not making this stuff up people!

track 5 is a complete mystery! the people who put together this compilation have no idea where, when, or by whom it was recorded. it is taken from a double-sided acetate and is actually a really good example of whimsical british psych-pop.

track 8 features ARTHUR BROWN (of CRAZY WORLD OF...fame), with the a- side of his first single, 3 years before he had a worldwide number one hit with 'fire'! he is backed by a band called the DIAMONDS for this ANIMALS-flavored r&b workout.

track 9 is by michigan band the GLASS SUN and is my personal favorite on this cd. it is a fuzzed-out psychedelic masterpiece of a song called 'silence of the morning' and features some mind-blowing guitar work. this is one KILLER track!!

track 10 is by a band called the MAZE, who should not be confused by the different american band with the same name. members rod evans and ian paice left this group in 1967 to join DEEP PURPLE.

track 11 features a song called 'happy life' by the sole australian band on this disc, the LIMIT. though this song is from 1969, it curiously has a 1966-era mod sound to it!

track 13 is the other side of the double-sided acetate by the unknown band we heard on track 5. ATTENTION GULL: --- THIS SONG IS ABOUT A PARROT!!!!!!!!!!!!!!!!!! (editors note: ANYONE who knows me knows that I love parrots, and that the gullbuy is named after my blue fronted amazon parrot 'gull' ---Carl)

track 14 is by the same band featured on track 4, before they had to shorten their name (from the PURPLE BARRIER to THE BARRIER) to avoid confusion with DEEP PURPLE!

track 15 is a fantastic song called 'devil' recorded in 1966 by a band called ANTHONY DARES PROGRESS. its a real shame this one never made it past the acetate stage. all in all, this cd is a worthy addition to your collection.