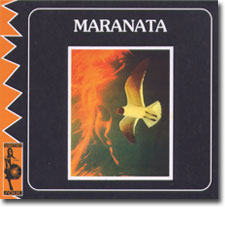 Vampisoul's reissue of Maranata includes the sole album released by the Uruguayan group Maranata featuring Roberto Giordano originally released in 1978. Roberto Giordano was a jingle writer and the bass player for the Uruguayan band Totem, before he decided to release the Maranata album as a promotional tool to showcase the Sondor recording studio. The result is a groovy bit of lost Uruguayan instrumental funk and easy music.

The best cut on the album is the opening Tema Sobre Campo, a funky cover of the Eduardo Fabini tune. Eduardo Fabini was one of the most important Uruguayan classical music composers, and the Campo theme was used by the SODRE (Servicio Oficial de Difusión, Radiotelevisión y Espectáculos, formerly, it meant Servicio Oficial de Difusión Radio Eléctrica and its the official government broadcasting service for Uruguay) shortwave service as an interval signal. The Maranata version updates this old classical theme to be a funky workout with some sweet fuzz guitar and ominous orchestrated funk and wah wah.

The album continues in a laid back funk vibe with some electric keyboard and more fuzz guitar on a cover of Le Lis ( the Fox), which was written by former Mahavishnu Orchestra drummer Billy Cobham from his 1973 album Spectrum.

That mellow, slinky, funky vibe is continued on a sweet version of Son For Father (Song For My Father) by Horace Silver. Added wordless vocals are a nice treat.

The disco-inspired big-band funk of Maynard Ferguson's Primal Scream (from the album of the same name released in 1976) is improved upon by accenting the funky James Brown vibe here.

The Ary Barroso composed Bahia which has been covered by the likes of Caterina Valente, Xavier Cugat, Arthur Lyman and John Coltrane in the late 1950s, gets the updated 70s easy funk take in the Maranata version. It reminds me of the Deodato 70s sound. Fittingly, the Deodato tune Carly Carola (Carly and Carole) from Prelude, the Deodato 1972 album (the album with the hit version of Also Sprach Zarathustra, the theme from 2001: A Space Odyssey) is covered here bringing with it, its sweet electric keys vibe.

There are two Roberto Giordano originals El Ladron and Maranata - El Ladron is a laidback soulful funk groove and Maranata ends the disc with an extended 7 minute funky jam which is augmented by a lengthy accordion solo. Seems like it wouldn't work but it does, surprisingly, making this another highlight up there with the opening track.

One of the cheesier tracks is a version of Ruben Rada's (the Uruguayan percussionist) Eloisa, thanks to its heavy use of cheesey 70s synths. Also, the cover of the Peter Cetera/Chicago tune If You Leave Me Now is cheese city. The worst has to be the out of tune cover of Henry Mancini's Angeles De Charlie (the Charlie's Angels theme song).