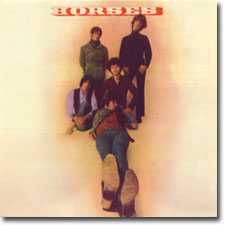 Horses was the follow-up group featuring Tim Gilbert and John Carter from The Rainy Daze, the group that had a moderate hit with the pot ode called That Acapulco Gold (which later showed up on their Uni LP). Freight Train by Horses appeared on In The Garden, while Cheyenne showed up on Out of Nowhere, along with The Rainy Daze song Make Me Laugh. Also, The Rainy Daze song Fe Fi Fo Fum (aka Blood Of Oblivion) showed up on Fading Yellow volume 6, while the Tim Gilbert project called The Higher Elevation (with a tune called The Summer Skies) appeared on Fading Yellow volume 2. So while pieces of the puzzle were falling into place, the whole story was incomplete until the reissue of the Horses album.

For some reason when White Whale released the Horses album, it was barely released. In fact, members of the band didn't even know it existed until stumbling upon it by accident in the 1980s. Rev-Ola has finally done the Horses album justice by reissuing it in its entirety, along with the The Rainy Daze single Make Me Laugh / My Door is Always Open. Songwriters Tim Gilbert and John Carter had come along way. The Rainy Daze bonus tracks that cap the album actually work against themselves by showing just how far these guys had come songwriting wise.

Sadly, the Horses album disappeared into the ether of time before members of Horses moved on to Kingfish (a band featuring The Grateful Dead's Bob Weir) and New Riders of the Purple Sage, amongst other things. There's been a rumor that Don Johnson of Miami Vice fame was the lead vocalist on the Horses album, but research by Rev-Ola's Steve Stanley seems to prove otherwise (though a message from the Don Johnson doesn't actually refute it).

Horses mined a more graceful version of soft rock and country that was permeating the sounds of The Velvet Underground (Loaded), Bob Dylan (New Morning and Pat Garrett and Billy the Kid) and The Strawberry Alarm Clock (their music from Beyond the Valley of the Dolls ). Old school singers like Johnny Cash and Roy Orbison were ready and willing to latch onto some Horses tunes, but sadly due to business differences this was not to be.

Tunes like Freight Train (the song Johnny Cash was eyeing for his Orange Blossom Special album), Birdie In A Cage (an acoustic workout with a raw but clean sound), Nothing At All (a melodic tune that could've been a smash soundtrack theme), Cheyenne (the song Roy O was aching to sing), Run Rabbit Run (a more rocking number that has shades of Johnny Cymbal or David Cassidy), Overnight Bag (a song that would give pub rockers and glam rockers a run for their money), Asia Minor (the wholesale chanting rocker) and Wind (a pensive Nick Drake like album closer) all show that Horses had a lot to offer if only the world were willing to listen. It also goes to show the best intentions for a perfectly hued musical vision can collapse under the weight of a heartless, fickle business.