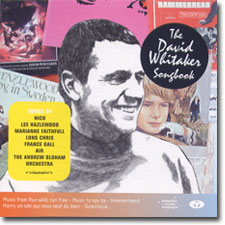 David Whitaker is best known for the symphonic arrangement of the Rolling Stones' The Last Time performed by The Andrew Oldham Orchestra which The Verve nicked to include in their hit Bittersweet Symphony, but he was a prolific artist in both soundtrack work and with pop artists.

Throughout the years he's worked with the likes of Lee Hazlewood, Nico, Marianne Faithfull, The Eurythmics, Saint Etienne, Simply Red, Kings of Convenience, The Rolling Stones songs as well as many French artists like Claude Francois, France Gall, Etienne Daho, Air and Serge Gainsbourg (the orchestrations of Initials B.B and Comic Strip were by David Whitaker).

Tricatel followed up the Andre Popp - Popp Musique collection with the David Whitaker Songbook in 2002 which includes many of these artists and soundtrack recordings.

If I have one complaint, it is that not enough of David Whitaker's pop work is included here. It really is sprinkled throughout sparingly amongst his soundtrack and soundtrack inspired work which all tends to be on the lounge soundtrack tip. But I guess this fits in with the album which inspired this collection, The Rolling Stones Songbook which was itself an orchestrated collection of Rolling Stones tunes.

The pop works are sprinkled throughout the various soundtrack and soundtrack inspired work David Whitaker recorded for Hammerhead (1968), Run Wild, Run Free (1969), Dominique (1978), With a Friend Like Harry... (2000), and Music To Spy By (a soundtrack easy inspired record recorded by The David Whitaker Orchestra).

All of this really fine soundtrack and soundtrack inspired work uses easy rhythms, French inspired melodies, harpsichord instrumentation, and definitely has a soundtrack vibe similar to Ennio Morricone or Francis Lai. It might however weigh down the disc for those who are looking for the pop song structures and orchestration of the few pop works included on this compilation.