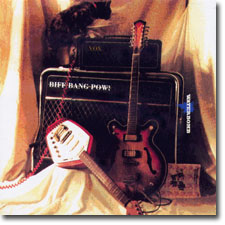 With Biff Bang Pow!, Alan McGee took the sounds he liked best from the early 80s West Coast Paisley Underground and added the influences of the Northern Soul, Postcard, making the sound prettier, jangly. Many deride C86 for those aforementioned adjectives, but if you have a problem with happy sounding chords, ace arrangements, and distinctive singing, I can only offer my condolences. Even if Biff Bang Pow! weren't always at the top of the class of C86, the bands forming around that time influenced and certainly did one up each other, making for some classic releases.

Waterbomb is a 23 track best of compilation mix of single and album tracks that is a good BBP! primer. The liner notes could use more details about which albums the tracks came from, but it does have a discography. Waterbomb is a little uneven in places. It's mostly peaks and a few valleys, but the peaks make for some good summer listening.

The opening instrumental title track 'Waterbomb' has urgent guitar riffs, with extra tambourine and harmonica that will get your toes tapping.

'There must be a better life,' their second single, sounds like diluted Jasmine Minks.

'The chocolate elephant man' verses start out gently. The band builds a nice crescendo around each chorus of ' can we work it out?' They sound less like Jasmine Minks, but they still haven't gotten it all out of their system.

'Love and hate' has a serious sound and at times, it reminds me of Jasmine Minks '30 second set up.' The band is full speed ahead throughout and play like they're trying to win the race, as McGee spits out ' love and hate', sounding like Television Personalities Dan Treacle on 'The Painted Word'.

'Wouldn't You' is a fun carefree track and I'm pretty sure McGee is having a laugh here '...wouldn't you say we're all happy now;it's great to be alive today;'

'Then when I scream' single version is the first of two tracks that modifies the riff from The Stranglers 'Golden Brown,' It was too distracting to let the rest of the song come through.

Track 7 'Someone stole my wheels' has the feel of Brian James' classic single 'Ain't that a shame' and the band rocks a bit more. I like the combined themes of upheaval and shoulder shrugging here 'Someone took my wheels out from under me; I suppose this is the end of the rainbow.' It seems like they've taken that 70s chestnut by Melody 'I've got a brand new pair of roller skates, you've got a brand new key...' and turned it on its head.

The next track 'Love's going out of fashion' another single, is even stronger, especially the singing. It's full of passion. It's a nice change of pace from all this enjoyable breeziness. The playing and (even the) singing are really strong. It's wistful and reflective, maybe they're showing their mature (?!) side here 'Now I'm older looking back at the time we had, the way we used to be;' This could be their response to the Jasmine Minks single 'Deep.'

'The Beat Hotel' has cool sweet female guest vocals (uncredited on the liner notes) and a 60s girl group beat with echoing guitar ';no I don't mind, it's really got a hold on me and that's no crime;'

'Fifty years of fun', the Biff Bang Pow! debut single has the sound that would evolve and become C86, psychadelic and poppy sounding guitars. It also has a unique pensioner theme ';just a handshake and a watch;'

'The Death of England' has a disco feel with lots of tambourine and manages to sound serious while borrowing a Stones phrase ';but I know the color of her lies;.she comes in colors;'

'It makes you scared' is more intense sounding. They go back to urgent playing that also gets a little quieter. They sustain that combination all the way through, which works well as McGee ponders how scary it is to take the plunge ';don't you wish to surrender; I don't know if I'll ever dare...'

'She never understood' almost goes back into Jasmine Minks sound territory. The wistful call and echoed responses ache with sadness 'I don't realize what she meant to me even though we're supposed to carry on;'

'In the afternoon' starts out softly with echoing guitar, doubled vocals and steady tambourine. The beat reminds me of Jasmine Minks 'Cold hands, warm heart' but it sounds a little more psychadelic than C86.

'She paints,' is wistful, not just for the acoustic guitar and the pining. The possibilities of sharing theme 'I first met you, you were young naïve and looking for a friend;' make it all work.

The girl from Well Lane' has too many lines with bad color metaphors 'I can see the color of her hair is brown, that girl is getting me down;' He can do better than that.

'Baby you just don't care' sees them back on form. The devastation of losing someone and falling apart really comes through here ';I've got this disease it's called loving it's killing me;'

'Hug me honey' has, like the other lesser tracks some good enough playing, but the singing just isn't there.

'A girl called destruction' has a peppy feel like one of the other bands of that era Brilliant Corners, only here the singing is in a slightly higher register and it doesn't matter what happens even if it's the wrong girl 'I don't feel tomorrow, I don't feel the hurt and sorrow.'

'She's got diamonds in her hair' has a strange rhythmic start almost like 'Boots' before turning jangly. This one is also a keeper.

The album version of 'Then when I scream' borrows the rhythm from The Stranglers 'Golden Brown' with too breathy singing thrown in.

'Miss California Toothpaste 1972' is not the best title, but the song makes up for that. It sounds like the jumping off point for another one of the top C86 bands Close Lobsters. It has memorable jangly guitar it's really funny as McGee is making fun of someone who wants fame even if he might want all of those trappings too ';she said she always wanted lots of attention;she said she always wanted lots of money;'

The album closer, yet another amusing title 'The whole world is turning Brouchard' starts out bouncy C86 and slows down a little to make way for lots of groovy keyboard riffs. It's a nice bookend for this compilation.

Waterbomb is a great way to learn about where C86 came from and Creation Records and it will make for some great summer listening.