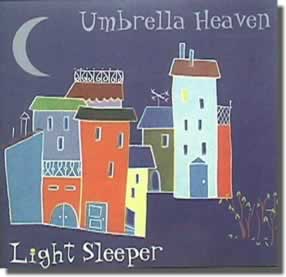 Simon Aldous's lyrics and vocals dominate this album, and in most tracks his exceptionally deep yet somewhat muted voice complements his unique lyrics and the band's guitar-dominated nicely. This is especially true in Out Tonight, the first track. Out Tonight describes an ideal night on the town but ends in the singer's not wanting the night to end for fear of impending trouble. The song starts out soft and slow but gets louder and gains momentum, mirroring the singer's increasing state of worry. What's interesting though, is that Aldous's voice retains the same calm tempo and tone despite the varying guitar sound.

I especially liked In The Back of Your Car because I think it showcases the band's guitar talent quite well. You Want Me Dead was my favorite track, though. This also has a great guitar sound with a very catchy chorus. You Want Me Dead is interesting because the lyrics and melody do not complement each other at all. While a sample from the chorus is "You want me dead/So you can share my bed/With another lover/Who irritates you far less than I do", the guitar is strong and fast and the beat is quick and cheerful. But it is Aldous's voice that provides middle ground for these two different moods and links them together. It is still deep and somewhat sad yet adapts to the quick tempo. One can feel sympathy for the narrator yet be happily humming the tune at the same time. A similar phenomenon exists in Here's Something Real (for you to sink your teeth into). The melody is upbeat and pop-like while the more pessimistic lyrics talk of experiencing genuine "passion and heartache" to truly express oneself by music. One can especially feel Darren Hayman's influence exerting itself on these tracks. I can almost envision Hefner doing a cover version of these three.

Never Leave Your Lover in the Summer is kind of sad but also has a great guitar melody that keeps it from getting too depressing. Summer is a real downer though, with lyrics like, "I hate summer/It reminds me of all the things I've lost/I'm going to fade away". Summer is light on guitars and backing vocals so it comes close to having a blues-y feel.

Melt, the last track on Light Sleeper, sticks out in my head the most because it is the only track on which Claire Lemmon sings vocals. This song comes close to having a punk feel because of its fast and almost violent guitar. Her voice, while slightly more dynamic than Aldous's, still has that same muted tone.

In general, Aldous's voice is so distinctive that it became the most noticeable aspect of the music on this album to me. But the fact that it is so noticeable and remains so consistent throughout all of the tracks makes Light Sleeper a coherent, even if at times monotonous, sound. The bottom line: I enjoyed the album, though I wouldn't necessarily listen to it in its entirety in just one sitting.